Funeral services for Lucille F. Larson, 94, of Albert Lea will be at 10:30 a.m. Thursday at Hayward Lutheran Church. The Rev. Joshua Enderson will officiate. Interment will be at Hayward Cemetery. Visitation will be from 5 to 7 p.m. Wednesday at Bayview/Freeborn Funeral Home and one hour prior to the service at the church. Online condolences are welcome at www.bayviewfuneral.com.

Lucille died Wednesday, July 6, 2016, at Our House in Austin. Lucille F. Larson was born April 4, 1922, in Albert Lea, the daughter of Fred and Nellie (Klose) Sorenson. She attended school in Albert Lea, graduating in 1941. She had worked for Woolworth’s, American Gas and Land O’Lakes. On Nov. 1, 1946, she was united in marriage to Curtis Larson at Trinity Lutheran Church in Albert Lea, where she had been baptized and confirmed. The couple farmed for seven years in the Lerdal area north of Hayward before moving to the family farm southwest of Hayward, where they farmed for 44 years. 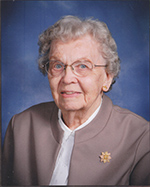 Lucille was a member of Hayward Lutheran Church. She took part in the church council, Women of the Evangelical Lutheran Church Association offices, was a Sunday school teacher and was active in Naomi Circle. She was also a member of the Albert Lea Eagles Auxiliary, Veterans of Foreign Wars Auxiliary, Hayward Senior Citizens, Neighborhood Club and Extension Club.