An Albert Lea man is facing prison time after being charged with multiple felonies.

His first appearance in court was Friday. 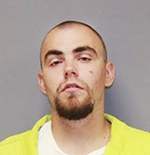 Court documents state an Albert Lea Police Department lieutenant and officer were dispatched last Wednesday shortly after 8:30 p.m. to an address in Albert Lea on a report of an assault involving a knife.

The lieutenant reportedly spoke to the alleged victim, who said Roberts threw her on the ground, holding her by her hair. She said Roberts held a five-inch folding knife to her throat and threatened to kill her.

A small cut was reportedly observed on her left wrist.

The alleged victim was reportedly Roberts’ girlfriend for approximately 11 months.

Another witness who had reportedly been inside the residence before the assault said that Roberts grabbed the alleged victim by the hair and threw her to the ground. The witness reported that Roberts then knelt down and held the knife near the alleged victim’s head, threatening to kill her before letting her go and leaving the scene.

All four tires on the alleged victim’s vehicle were reported flat with puncture holes in the side walls.

Roberts was reportedly located and arrested by police Thursday at an Albert Lea residence. In a Mirandized interview, he reportedly told an officer that he had gone to the residence because he thought the alleged victim had taken his children.

Roberts reportedly admitted that he cut the tires on her vehicle, blacked out and woke up in a field. He reportedly denied knowing anything about an assault.

Court documents state Roberts said he had mental health issues and has been using methamphetamine for 16 years, but said he had not used meth within the last couple of days.

The documents also state Roberts was convicted of a harassment restraining order violation in May 2010, second-degree assault in December 2012 and possession of a dangerous weapon after reportedly possessing a folding knife with a five-inch blade in Freeborn County Courthouse.

Roberts’ next court appearance is scheduled for July 14.

Roberts has been charged in a separate file with first-degree criminal damage to property. A plea hearing on the file is also scheduled for July 14.