He was originally also charged with domestic assault by strangulation.

According to court documents, an officer with the Albert Lea Police Department was dispatched on Nov. 28 to a residence on Water Street regarding an alleged domestic assault. 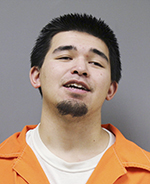 A witness to the incident reportedly said she had seen Haas punch the victim in the back of the head after getting angry at the victim.

The victim told police Haas punched her in the back of the head, pulled her hair and choked her.

An officer reportedly saw extensive bruising on the victim’s right hand, bruising and a swollen finger on her left hand, a scratch above her right eye, a bite mark on her right arm, several red marks across her throat and bruising on her forearm and her forehead.

The officer said he felt numerous lumps on her head where she said Haas struck her.

Sentencing is scheduled for July 21. Haas faces a presumptive sentence of nearly two years in prison.

Haas originally pleaded guilty to felony domestic assault in January, but withdrew the plea in late May.

Two files were dismissed. The court will execute his sentences in three probation files.