Peggy was born on Election Day, Nov. 7, 1944, in Albert Lea to Donald and Lillian Dudley. Peggy was baptized and confirmed at First Lutheran Church in Albert Lea.

On June 7, 1963, she married her high school sweetheart, Morris Haskins, at First Lutheran. She and Morris had three children: Christopher, Kari and Jennifer. They resided in Albert Lea until moving to their lake home in northern Minnesota upon their retirement. 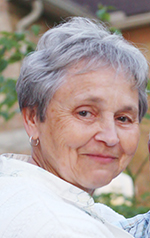 The greatest joy in Peggy’s life was being a grandmother of eight. She never missed a concert, recital or sporting event if at all possible, nor an opportunity to tell people about a grandchild. She was well known for her competitive streak when playing cards and Scrabble, her love of berry picking, hand feeding the birds at the cabin, her amazing ability to water ski around Fountain Lake without getting her hair wet, and her knack of out-driving Morris on the golf course. She loved to travel — especially to see her family in Germany — and spending time with friends in Florida.

Peggy is survived by Morris Haskins of Albert Lea; Christopher and Kerstin Haskins of Buchholz, Germany, Kari and John Brick of Albert Lea and Jennifer and Eric Helland of Duluth; grandchildren Kyra and Thorben Haskins, Erin, Paige and Maxwell Brick, and Olivia, Maria and Sjoren Helland; siblings Donna Hoaglun, Cindy and Tom Hamberg, David and Michelle Dudley, and Tony and Terry Dudley; and in-laws Mary Ann and Ron Worner and Robert Haskins. Peggy was raised in and married into a large extended family and leaves behind numerous nieces, nephews, cousins and aunts whom she loved spending time with.

The family said they can never adequately express their gratitude as a family to the caregivers who were able to administer the care they could no longer provide at home. The love, humor and gentleness that the staff at Oak Park Place, Prairie Senior Cottages and St. Croix Hospice gave not only to Peggy, but to her entire family will never be forgotten.

To celebrate Peggy’s life, a visitation will be from 4 to 7 p.m. Thursday at Bonnerup Funeral Service, followed by a funeral service at 11 a.m. Friday at First Lutheran Church in Albert Lea.

In memory of Peggy, her family asks others to order the dessert, go on the vacation, leave the housework, live each day fully with family and friends, and to consider donating to Alzheimer’s research to help end the horrendous disease for future generations.