Memorial services for Marjorie Dammen, 87, of Blooming Prairie will be at 11 a.m. Friday at Bayview/Freeborn Funeral Services. The Rev. John Holt will officiate. Interment will be at Hillcrest Cemetery.  Friends may greet the family one hour prior to the service at the funeral home. Online condolences are welcome at www.bayviewfuneral.com. 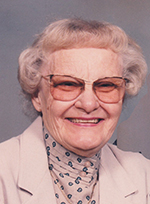 Marjorie Phyllis Dammen was born Jan. 1, 1929, in Albert Lea, the daughter of Ira and Charolette (Peterson) Grove. She graduated from Albert Lea High School. After graduation, she worked at Montgomery Wards. On Feb. 25, 1949, she married Calvin Dammen. The family moved to Mason City, Iowa, where Marjorie worked for Sears. After retirement in 1989, they moved back to Albert Lea. Marjorie enjoyed being a homemaker, painting ceramics and planting and caring for flowers.