Memorial services for Merrill Johnson will be at 2 p.m. Thursday at Trinity Lutheran Church in New Richland. The Rev. Paul Andree will officiate. Visitation will be from 4 to 7 p.m. today at Bonnerup-Friedrich Funeral Chapel in New Richland and again one hour prior to the service at church. Interment will be in St. Olaf Cemetery in rural New Richland. 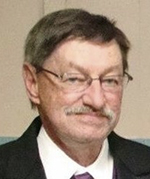 Merrill was born on Sept. 13, 1950, to Selmer and Ruth Johnson in Manchester. Merrill attended Albert Lea Schools and then went to truck driving school. On July 9, 1973, Merrill married Gail Pederson and they made their home in New Richland. Merrill drove truck for many years for Kruegers and Huntington’s Auto, to name a few.

In Merrill’s free time, he enjoyed riding his motorcycles, watching  NASCAR, driving his old 1960 Pontiac and belonging to Memories Car Club. He treasured time with family, especially his grandchildren. Merrill will be remembered fondly by his family for his funny pranks over the years and sense of humor.

Merrill was preceded in death by his parents Selmer Johnson and Ruth and Paul Werner; brothers Stanley, David, Dale and John Johnson; and brother-in-law, Gerald Hendrickson.