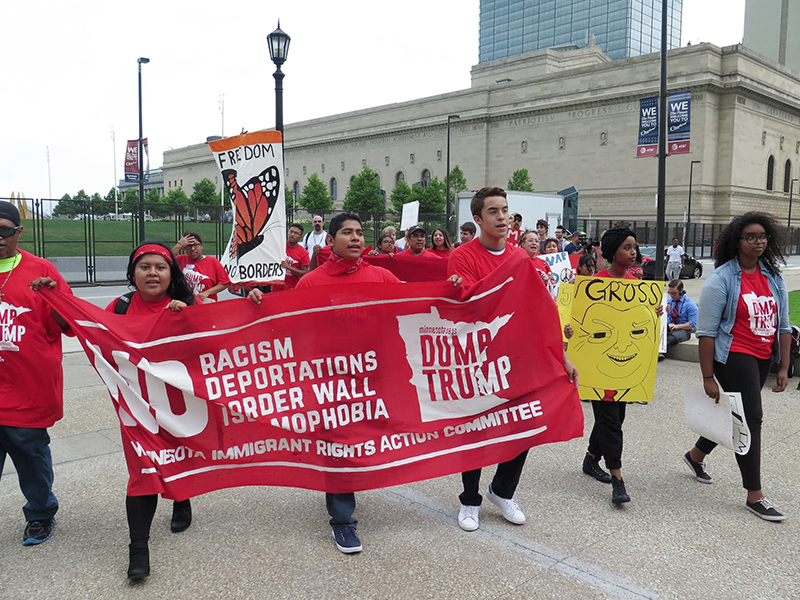 Protesters from Minnesota take to the streets in Cleveland for the Republican National Convention’s opening on Monday. - Mark Zdechlik/MPR News

CLEVELAND — Joseph Vital took time off from his job at Minneapolis Public Schools to cram into a bus with dozens of Minnesotans headed to protest at the Republican National Convention in Cleveland this week.

The 23-year-old said just showing up was well worth the long trip.

There have been predictions that the convention and Trump would bring violent demonstrations to Cleveland. So far that’s not happened, but the convention has just begun. It’s already had a tumultuous opening with contention among party leaders on rules.

Almost none of the Republicans in town for their national convention came anywhere the demonstrators and their message of inclusion.

The protesters took issue with Trump on issues ranging from immigration to economic injustice and what many believe is unfair treatment of African Americans by some in law enforcement.

“I believe in the power of people coming together to get their message and pressure the politicians,” said Brad Sigal of the Minnesota Immigrant Rights Action Committee, who coordinated the trip to protest Trump’s position on immigration. “That’s, in my opinion, that’s why change happens.”

The demonstrators from Minnesota won’t be around for any more rallies or marches in Cleveland this week. Later on Monday, they were already back on the bus for the ride home.