Funeral services for Patricia “Pat” Ann Roche of Albert Lea will be at 2 p.m. Saturday at the Bonnerup Funeral Service chapel in Albert Lea. The Rev. Kent Otterman will officiate. Visitation will be one hour prior to the service at the chapel. Interment will be in Hillcrest Cemetery. Patricia died Friday, July 22, 2016, at Good Samaritan Society of Albert Lea. She was 83. 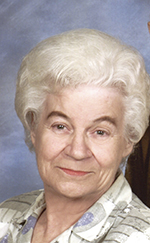 Her first job was with Emil Olson’s, where she met her husband, Lawrence, who also worked there. She worked for the Eagles Club, the Stable’s Restaurant and the Albert Lea Country Club. She retired from Church Offset Printing having worked there for many years. She enjoyed playing cards, working puzzles and crosswords, dancing and camping. She loved to collect and make teddy bears and winters in Texas. Pat was on the family council at Good Samaritan for many years.

Pat was preceded in death by her husband, Lawrence; parents Ray and Agnes; sister, Jeanine Bolinger; and in-laws John and Mary Roche.