He was born Aug. 13, 1924, in Albert Lea, son of the late Arnold and Agnes (Smeby) Nelson and stepson of Louise Nelson. 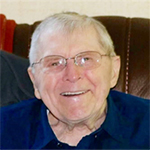 Paul graduated from Albert Lea High School in 1942 and entered the United States Army. He served overseas in the South Pacific during World War II.

Paul attended Luther College in Decorah, Iowa, where he earned his degree in education. He married the love of his life, Charlotte Martinson, on Feb. 19, 1949, in Decorah. They were blessed with 62 beautiful years together. Paul was a teacher, guidance counselor and driver-education instructor for the Iron Mountain School System for more than 30 years, retiring from teaching in 1984.

He continued with driver education and school playground patrol for several years after retirement. He rarely went a day without being fondly recognized as someone’s teacher or mentor.

Throughout his career, Paul furthered his education with credits from the University of Michigan and Michigan State University, eventually earning his master’s degree in education. He also worked in the shoe department at J.C. Penney Co. for several years. Paul was a member of Our Saviour’s Lutheran Church U.C.T. and Oak Crest golf course. He loved all sports and was a diehard Mountaineer fan, working the scorer’s table at countless basketball games.

He enjoyed gardening, golfing, reading and playing cards, especially cribbage and pinochle. He was gifted with a beautiful tenor voice and sang with Our Savior’s Senior Choir for many years. He especially loved singing to the Lord with his family by his side.

Paul was preceded in death by his wife, Charlotte, in 2012; two sons, David Nelson, in 1978, and Paul M. Nelson, in 2010; two sisters, Phyllis Haaland and Carol Olson; two brothers, Aaron Nelson and David Nelson; and an extended family member, Mike Golfis, in 2016.

He had many dear friends and extended family that were very special to him and was known as one of the most kind and gracious men you would ever meet.

Paul set a beautiful example for others to follow as a father, grandfather, mentor and a man of God.

His beautiful smile lit up every room he entered, and his sense of humor was infectious. He made everyone who spent time with him feel special. He was loved by so many.

Visitation was 9:30 a.m. to noon Friday at Our Saviour’s Church in Iron Mountain.

Funeral services followed at the church. The Rev. Bob Gordon officiated. Burial was in Evergreen Memorial Cemetery in Crystal Falls, Michigan. In lieu of flowers, memorials may be made to Our Saviour’s Lutheran Church music program.

Condolences to the family of Paul B. Nelson may be expressed online at ernashfuneralhomes.com.

The family has entrusted the Erickson-Rochon & Nash Funeral Home of Iron Mountain with the funeral arrangements.