A Plymouth man was sentenced to more than three years in prison Thursday in Freeborn County District Court after pleading guilty to second-degree methamphetamine possession in April.

Gilberto A. Rodriguez, 64, was given credit for 469 days served. He will serve his sentence at Minnesota correctional facility in St. Cloud. 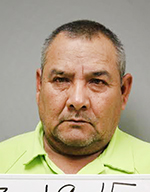 The sentence is in connection with charges stemming from more than 30 pounds of meth found on Interstate 35 in Freeborn County during a March 2015 traffic stop.

According to court documents, Rodriguez was arrested March 19, 2015, after a trooper on the traffic stop noticed a prepaid cellphone, known to be associated with criminal use to avoid law enforcement detection.

The trooper used a wrench to open the compressor and found 33 packages of what later field tested as meth. Each of the 33 packages weighed about a pound.

Rodriguez was reportedly the passenger in the vehicle, and he was originally charged with first-degree meth possession.

Feliberto Rodriguez Guerrero, the alleged driver of the vehicle, was sentenced to three years and five months in prison in April.

Rodriguez Guerrero was given credit for 406 days served.