Robert E. Martin died June 29, 2016, at the Owatonna Hospital. Mass of Christian burial is set for 11 a.m. Tuesday at St. Joseph Catholic Church in Owatonna. Interment with full military honors will take place at Forest Hill Cemetery and will be provided by the Steele County Funeral Unit. Friends may greet the family 9:30 to 11 a.m. Tuesday at the church before the funeral liturgy. 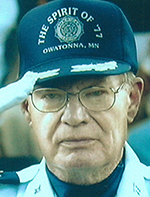 Robert was born March 7, 1930, the son of Emil and Hazel (Winslow) Martin in Owatonna. He attended and graduated from Owatonna High School in 1948. He enlisted in the United States Air Force following graduation and was stationed in Washington, D.C. area for four years. After being honorably discharged  Fuzz continued his education at the Minnesota School of Business. While attending school he worked part-time at St. Clair’s for Men. Upon graduation Fuzz started a 35 plus year career with Federated Insurance working in personal lines marketing. He met the love of his life, Barbara Christensen, at Federated Insurance and they were married on Oct. 15, 1960. Fuzz continued to work at Federated until he retired in the early 90s. He was a member of the American Legion, Veterans of Foreign Wars and the Eagles Club. He was the co-chairman/chairman of the Minnesota Pheasants for veteran’s program for over 50 years. He was also parade chairman for the American Legion and served on the Steele County military funeral unit. He loved gardening, cooking, spending time with his family, helping his beloved fellow veterans and visiting with community members.

Fuzz was preceded in death by his parents and a brother.

Memorials are preferred to the Minnesota Pheasants for Veteran’s program.