Robert Louie Mortenson, 55, of New Richland died Friday, July 22, 2016, at his home. A memorial service will be at 1:30 p.m. Tuesday at Bruss-Heitner Funeral Home in Wells. The Rev. Brynn Harms will officiate. Visitation will be one hour prior to the service at the funeral home. A private interment will take place at a later date. Bruss-Heitner Funeral Home in Wells is assisting the family. To leave an online condolence, visit www.brussheitner.com. 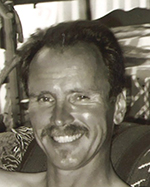 Robert was born Nov. 5, 1960, in Wells, the son of Louie and Marcelene (Martin) Mortenson. He attended Freeborn High School. Robert was a lifelong farmer and in his younger years he owned and operated R&D Drainage, along with his brother, Donny. He and his best friend, Lisa, had a daughter, Ashley, 24 years ago. He enjoyed heading to the North Shore on family vacations. Robert loved cars, motorcycles and anything with speed. He liked to putter and fix things on the farm and spend time outdoors. He enjoyed spending time with Ashley, riding the 4-wheelers around the 7 Day Woods. He loved spending time with his grandchildren. Robert had a very distinct laugh, which people loved to hear. Robert will be greatly missed by all those who love him.

Robert is preceded in death by his parents.