Funeral services for Roy Springborg, 76, of Albert Lea will be at 10:30 a.m. Wednesday at Trinity Lutheran Church. The Rev. George Marin will officiate. Interment will be at Hillcrest Cemetery. Military honors will be accorded by local servicemen’s organizations, Veterans of Foreign Wars and American Legion. Visitation will be from 4 to 7 p.m. Tuesday at Bayview/Freeborn Funeral Home and one hour prior to the service at the church. Online condolences are welcome at www.bayviewfuneral.com. 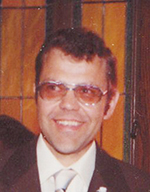 Roy Springborg was born Nov. 13, 1939, in Albert Lea, the son of Emil and Gladys (Knaack) Springborg. Roy attended Albert Lea High School. In 1959, Roy enlisted in the United States Navy at 17. He was a Navy hydraulics technician for the Blue Angels Squadron stationed in Kingsville, Texas, at the Naval air station. After his discharge in 1962, Roy served in the United States Army National Guard 2-135 Infantry for many years.

On Oct. 1, 1958, Roy was united in marriage to Barbara Ann Klukow at Bear Lake Concordia Lutheran Church. Over the years Roy worked at Wilson & Co., then continued his education at Faribault Vocational College for tool and dye making. He thenworked at Telex in Glenco, Scotchman Ice as a tool and dye maker for 26 years and was the head of maintenance at Game Tech for 20 years. He was a member of Trinity Lutheran Church, where he served as an usher, Sunday school teacher and was active in men’s Bible study.

Roy was also a member of Fountain Lake Sportsman Club, the American Legion and Elks Club. He enjoyed camping at Best Point in Waterville, going up north with family to Detroit Lakes, fishing, gardening, going on pontoon rides, remodeling his homes, caring for his dogs and being with his family. Roy and Barb enjoyed traveling to Alaska, Jamaica,

Roy was preceded in death by his parents; sister, Janet Springborg, in infancy; and father- and mother-in-law Lloyd and Martha Klukow.