Short film by locals demonstrates emotion of guilt after accident 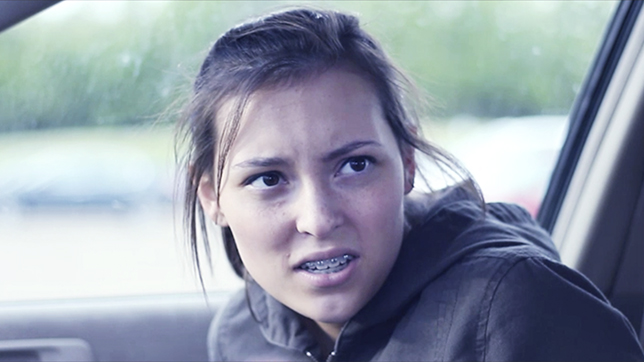 For the first time in Albert Lea history, a local director will showcase his brand new short film, “Guilt,” at the Marion Ross Performing Arts Center.

Written, directed and edited by Albert Lea native Ross Pirsig, the 20-minute film showcases the moral dilemma of two high school students after they get into a hit-and-run car accident. The film was also shot entirely in Albert Lea.

Faith, the main character who hits the dog in the accident, is played by Justine Nelson.

Following the hit-and-run which killed the dog, Faith and her friend, Carly — played by Tianna Abrego — must face a guilt that is growing inside of them, especially after they find out the dog they killed belongs to one of their classmates.

The film has Pirsig acting in it himself along three local actresses, as well, all of whom he has worked with in past school productions he directed.

Pirsig, an aspiring film director and actor, set the film at a $1,000 budget and has high hopes for its success in these next months.

Aside from the showing at the Marion Ross Performing Arts Center, Pirsig has also submitted the film to various contests around the country, in hopes to bring attention to his name.

His lifelong dream of becoming a big-time director and actor is coming together with this critical first step.

Pirsig got the idea for his recent film one day while on a walk, and decided to capitalize on it.

What it comes down to, according to Pirsig, is the idea of a moral dilemma, and this is where he got the idea to make a film about it.

“The main reason I thought of this as a potential movie idea is because we have all been in situations where we have done something we should not have, and we get that feeling of guilt,” he said.

In other words, it is relatable — something audiences can connect with.

“Guilt” will premier at 7 p.m. July 30 at the Marion Ross Performing Arts Center, where it will be available for viewing to anyone interested.

Following the 7 p.m. showing will be a question and answer session with Pirsig as well as the three local actresses.

Pirsig said he would like to send a special thanks to everyone who helped make the film possible, as well as welcome anyone to the showing.

Following the July 30 showing, “Guilt” will be available to watch online by contacting Pirsig at ross@rosspirsig.com.