Sister Vinciana Bauer, 90, a Franciscan Sister of the Congregation of Our Lady of Lourdes, in Rochester, died Saturday, July 2, 2016, at Assisi Heights.

Esther Mary Bauer was born to Gerhard and Helen (Reining) Bauer Aug. 18, 1925, in Adrian.  She entered the Sisters of Saint Francis in 1944 from St. Peter Parish in Caledonia. Sister Vinciana made first vows in 1947 and perpetual vows in 1950. She received a Bachelor of Science in elementary education from the College of St. Teresa in Winona in 1961 and a Master of Science in elementary school administration from Winona State University in Winona in 1966. 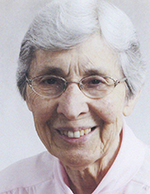 Following her years of teaching, Sister Vinciana served on the staff of the Christian Community Center at Assisi Heights from 1974 to 1976 and at St. Theodore Parish in Albert Lea from 1976 to 1999, where she coordinated elementary religious education, served in pastoral ministry and as a parish volunteer until her retirement to Assisi Heights in 1999.

She was preceded in death by her parents; two brothers, Vincent and Lawrence “Shorty” Bauer; and a sister, Theresa Heberlein.