Funeral services for Stanley Robert Getskow of New Richland will be at 11 a.m. Monday at Trinity Lutheran Church in New Richland. The Rev. Paul Andree will officiate. Interment will be in St. Olaf Cemetery. Friends may visit with family from 9:30 until the time of the service at the church. 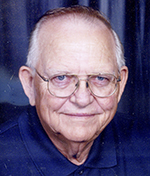 He graduated from Freeborn High School. On Sept. 23, 1956, Stan married Janice Larson. To this union four children were born: Jeffrey, David, Thomas and Karen. He was united in marriage to Helen Schenk-Wysong on June 18, 1982, and they resided in New Richland.

Throughout his life Stan had worked for Freeborn County Highway Department,  Hinkley Garage of Freeborn, Stan’s Service Center and Stan’s Sports Center in Freeborn, Freeborn County Co-op Oil Co., Getskow Petroleum Co, Richland Co-op in New Richland and Shari Candy Company in Mankato, from which he retired in 1998. He was proud to have received a special safe driving award while working at Shari Candy Co. After retirement he enjoyed mowing lawn for the Albert Lea Parks and Recreation Department.

Stan was a member of Trinity Lutheran Church in New Richland, where he had served on the council and was an usher. He had also been active in the Eagles Club in Albert Lea, the Lions Club in New Richland and had served four terms on the New Richland City Council. Stan enjoyed bowling, golfing, fishing and camping.

He was preceded in death by his parents and brothers Harold, George and Donald.