Taking a ride for veterans 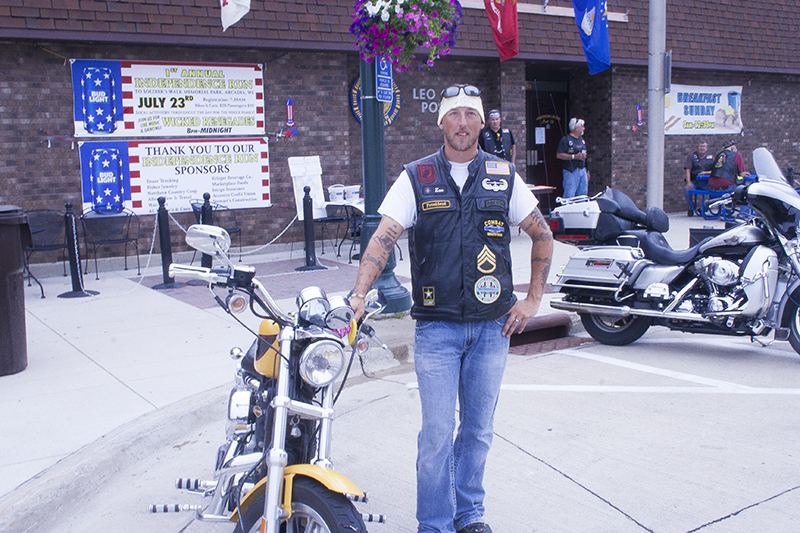 Zac Stuart prepares for a day of festivities and motorcycle riding at the Independence Run near the Albert Lea American Legion on Saturday. - Emily Wangen/Albert Lea Tribune

The first annual Independence Run was put on Saturday by the Albert Lea American Legion Riders Chapter 56 to raise funds for the Legacy Scholarship, Beyond the Yellow Ribbon and local Veterans Funds.

The Legacy Scholarship is a fund for families of veterans who were either killed in action or have over 50 percent disability.

The ride started at the American Legion in Albert Lea at 8:30 a.m., had a stop for lunch and ended over 100 miles away in Arcadia, Wisconsin, at Soldier’s Walk Memorial Park.

The park is a memorial to veterans of all U.S wars, from the American Revolution to the war on terror, the park has memorials for each war.

After a few hours at the memorial park, the riders made the two and a half hour ride back to Albert Lea, just in time to enjoy the evening.

At the Legion there was an indoor silent auction as well as other activities.

Preparing for this event was a learning experience for the Legion Riders, as this was their first large fundraising event since being formed earlier this year.

The chapter includes around 30 riders.

Despite the dismal weather, event organizer Zac Stuart hoped for around 30-50 riders.

“You can plan for everything except the weather,” he said.

Organizing the event required many volunteers as well as planning, but Stuart noted that because of the good cause, it was easier to put it together.

Giving back to veterans is important to Stuart and the riders as they have connections to the military, whether it be family members who are veterans or being part of the military themselves, according to Stuart.

The Legion Riders plan to have another ride next year around the same time.