The popularity of pickleball is on the rise in A.L. 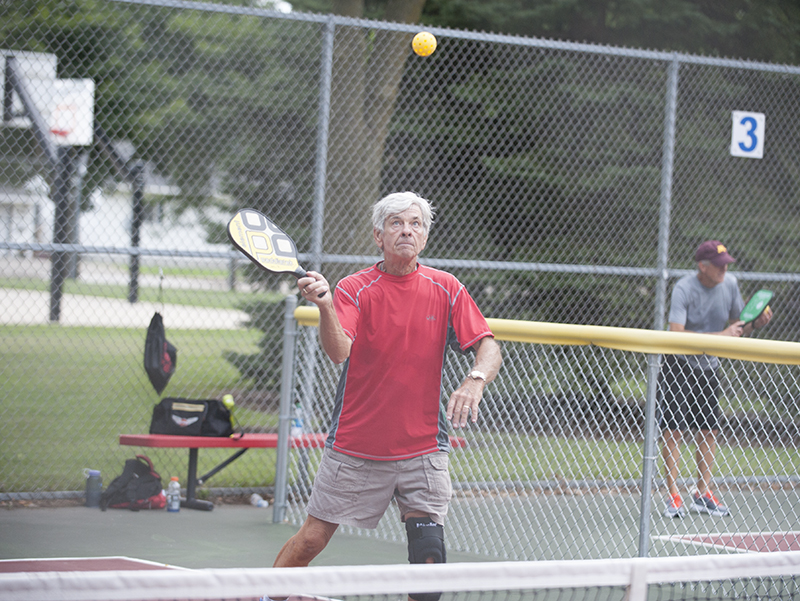 Looking for a game that is fun, fast-paced and relatively easy to pick up? Then you might want to look into pickleball.

The sport has gained significant popularity over the past few years, and is expected to jump from two million players up to eight million over the next couple of years, according to the U.S. Pickleball Association website.

At Frank Hall Park, there are six pickleball courts and there are also courts at the YMCA.

That’s a good thing, too, because Albert Lea is putting on a big tournament Aug. 21 and 22.

Terry Adams is an avid player and president of the Albert Lea Area Pickleball Club, and you can find him and many others playing pickleball almost any day of the week at Frank Hall Park.

“It’s a fun game and very fast-paced,” Adams said. “It really is a game for all ages, young and old.”

And the courts just aren’t getting used once or twice a week.

“Every morning about eight or 10 of us come out to play,” Adams said. “We have a schedule we follow. On Monday nights, it’s beginners and couples. Tuesday and Thursday night at 5 p.m. is for anyone who wants to play. We have a league on Sundays at 4 p.m., then we usually play Saturday morning at 8 a.m. The city of Albert Lea said this is the busiest facility it has in town.”

Adams and his friend, John Bauernfeind, retire to Phoenix in the winter, and the sport is really popular down there. Five years ago, they decided they would bring the game back north and introduce it to Albert Lea.

“It’s really gotten big with the Baby Boomers,” said Bauernfeind. “There is a U.S. Pickleball Association website and it shows a graph of places  to play. In 2010, there was roughly 1,700 places to play. Now, there are 4,800 places to play.” 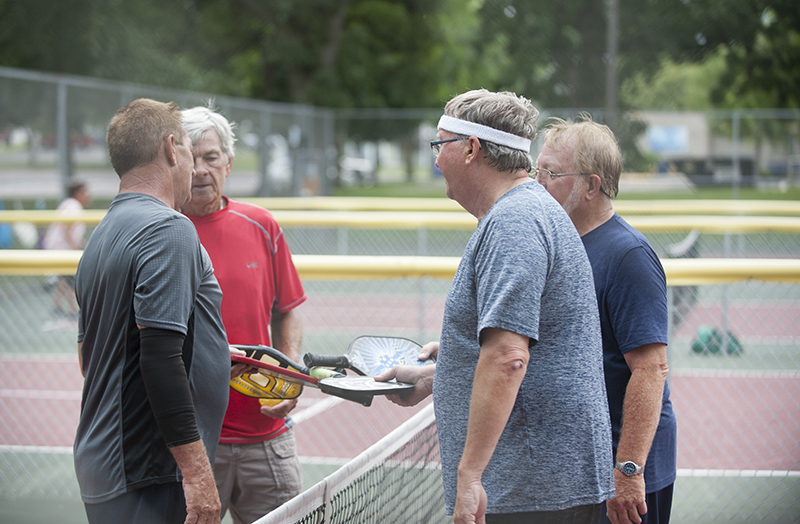 Bauernfeind and some of his friends put their racquets together to congratulate each other after a game of pickleball Thursday.

Pickleball is played on a smaller court than tennis. Four pickleball courts can fit inside a tennis court, and the serve is underhand, which makes it easier on the shoulder, another reason why a lot of older people play it.

Two big reasons people like to play pickleball is for the exercise and the socialization.

“Pickleball was my salvation for getting to know people here,” Bauernfeind said. “My wife and I bought a place here to get out of the Phoenix heat six years ago. The first year back, I was kind of a hermit. I didn’t know anybody. But that winter, I started playing pickleball in Arizona. The next summer, I went to the YMCA and asked ‘Who plays pickleball?’ Terry and Ron Holt were two guys who played, and that’s how it started for me.”

Pickleball has become big in Albert Lea, and has also stretched its reach to surrounding communities like Austin, Alden, Wells and Glenville.

This August, Albert Lea will put on its second pickleball tournament.

“Last year, we had about 60 players come from surrounding communities, and even other states,” Adams said. “We are expecting over 100 players from four states this year.”

“As long as the weather holds up and it’s not too hot, it’ll be a good time,” Adams said.