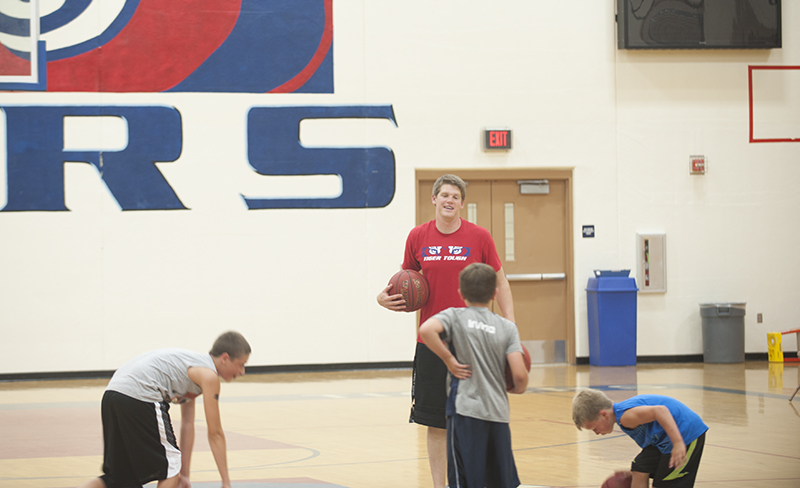 New Albert Lea boys’ basketball coach Lucas Novosad, center, shares a laugh with a player during a dribbling workout earlier in July. Novosad said he was excited to be named coach and has stressed that being available to players is something on which he is focused. Jarrod Peterson/Albert Lea Tribune

The Albert Lea boys’ basketball team has certainly endured its struggles the past few years. Having only won  five games in the past three years, the team is looking for a new leader to lead the program back to relevancy. The Tigers may have found that leader in Lucas Novosad.

His biggest obstacle will be turning around the program, and that includes getting players started at a young age.

“Building a program starts from the ground up,” said Novosad. “We need to be visible in the community, commitment from the youth and being available to the kids can help kids keep interest. I want to be able work with youth coaches and help teach younger kids the fundamentals of the game.”

Over the past couple of weeks, Novosad has been hard at work. He has been holding camps at the YMCA and skill work sessions for children as young as 7 to high school players.

Novosad is a 2008 graduate of the University of Minnesota, where he majored in elementary education. He is a native of Marshall, but ventured out of the region once he graduated.

“When I graduated, there were no teaching jobs in the area, so I went to a teaching convention in Colorado,” Novosad said. “I loved it out there and was able to get a job teaching sixth grade math and social studies.”

It was also where he met his newly-wed wife, Jessica.

“I met Jessica during my first year of teaching,” Novosad said. “We started dating and the rest is kind of history.”

The two got married out in Colorado last month.

The marriage also added to the craziness of the last few months.

While on spring break this past year, Novosad sent out applications because he said they wanted to closer to family. He said basketball wasn’t even part of the equation at that point.

“Basketball was separate, I just wanted to teach,” Novosad said. “We wanted to settle down. We applied for jobs in March, and actually came knocking on schools’ doors to see if there were jobs available. Albert Lea came calling while we were visiting, so we came down to interview. We just wanted teaching jobs, but Albert Lea had a great vibe to it so it was hard to pass it up.”

Once he was named head coach, Novosad has only seemed to pick up the pace. He has been extremely active in his first few months, holding open gyms and skill sessions with kids of all ages. Add the stress of preparing for a wedding to that list, and he is only proving himself more that he was the right hire for the job.

Novosad spent eight years in Colorado helping out and coaching teams, but never was he the head guy. Once Albert Lea activities director Afton Wacholz gave him the news that he was named head coach of the varsity team, Novosad could hardly contain his excitement. 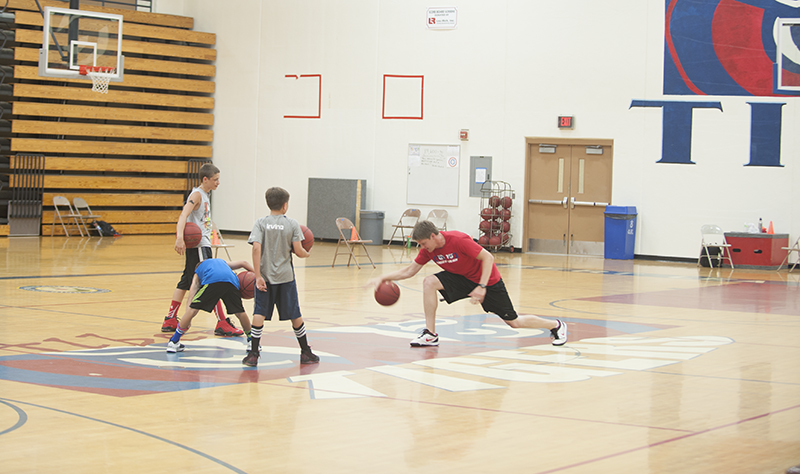 Novosad, right, teaches some young, future basketball players dribbling drills during one of his skill sessions earlier in July.

He even made a separate flight that occurred after he and Jessica visited for in-person interviews.

“When (Afton) called, they wanted to do an over-the-phone, but I told her I would rather come meet her,” Novosad said. “So I flew out the next day, got in at midnight, stayed at my aunt’s in Waseca, met with (Afton) at 7 the next morning and flew out that afternoon.”

This was something he wanted. An opportunity. A chance. And he finally has earned it after eight years of being an assistant or lower level coach.

But he certainly has his work cut out for him. This program has a combined record of 1-51 the past two

years. However, it doesn’t seem to bother Novosad. It only seems to make him energize him more.

“I told (Afton) that this program is going to have to start from the bottom up,” Novosad said. “It’s going to be a long process, but I think it’s doable. We have a lot of gym rats. We have had 10-16 guys show up at 6:30 a.m. who are here and wanting to get better. They keep telling me they want to have some success. It doesn’t matter about wins or losses right now; it’s about get this program on track.”

Rebuilding is a process. It always has been and it always will be. It will be a challenge, but it’s something Novosad is willing to take head on. This is his first time at the helm.

“Every opportunity is a learning opportunity,” Novosad said. “My biggest challenge will be getting things organized and getting things rolling, in terms of the youth program and the middle school. Everyone has to be on the same page with how we are going to play.”

So far, Novosad has received a lot of positive feedback. From parents to players, it seems like things are going smoothly.

It might take year or two or three, but Novosad has already put his imprint on the basketball program.

“I think we are on the right path,” Novosad said. “We are laying the foundation; we have three seniors who have stepped up to the plate. We are trying to change the mindset.”

Come this winter, Novosad and his group of Tigers hope to provide Albert Lea  something it hasn’t had since Ben Woodside played — relevant basketball.