Trump might have a chance in state that went for Ventura 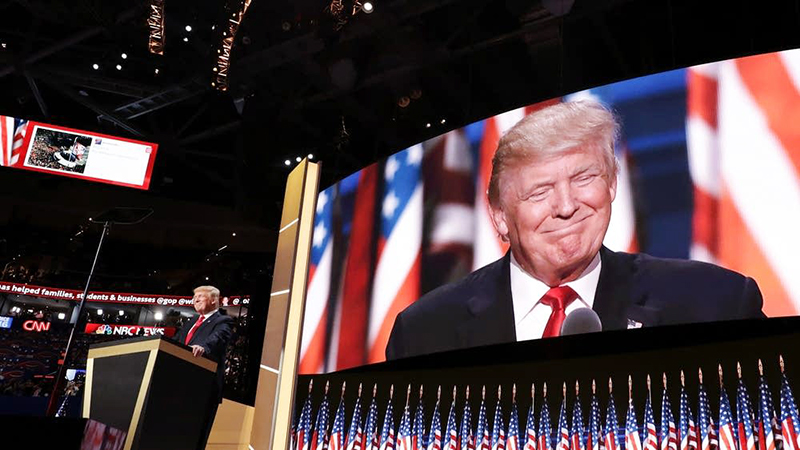 Donald Trump told cheering convention delegates Thursday night that he will continue to confound expectations and that his unlikely campaign won’t stop until he reaches the White House.

“My sole and exclusive mission is to go to work for our country, to go to work for you,” he said. “It’s time to deliver a victory for the American people. We don’t win anymore, but we are going to start winning again.”

Trump’s team has suggested Minnesota is one of the blue states they will try to put in play come November, but there’s been scant evidence of the kind of campaign presence he would need to pull it off in a place that hasn’t gone for a Republican presidential candidate since 1972.

But some of the Minnesota Republicans at the convention argue the conditions seem better than ever for a surprise. Trump, they say, isn’t your typical Republican — and Democratic rival Hillary Clinton has some work to do with a party base that delivered a humbling defeat in the March caucus.

“I think Trump could win Minnesota, I hope they put some money in Minnesota. It’s going to take that,” said delegate Marjorie Holsten of Maple Grove, who supported Sen. Ted Cruz in the race for the nomination.

Another original Cruz backer, Becky Hall of Duluth, is rallying behind Trump now. The stay-at-home mom has ties to the blue-collar Iron Range. The northeast corner of Minnesota is as reliable for Democrats as the Twin Cities core. But Hall thinks Trump’s stand against foreign trade deals, pro-gun stance and tough talk on national security has cracked a door open.

Hall readily admitted that Trump has to do more to close the deal in the region. Her advice? Show up and ask for their votes.

“I would like to see Donald Trump come to Minnesota — not to the metro area. I would love to see him go up to the Iron Range because there are people up there who maybe weren’t so vocal, maybe kept their opinions to themselves, but there are people talking about him up there.”

Pat Anderson came to Cleveland as a Marco Rubio delegate but is fine with Trump. The former Minnesota state auditor called Trump a moderate who doesn’t dwell on social issues that turn off many Democrats and some independents. Anderson says the more he sticks to that recipe, the better chance he’ll have to attract converts.

“Minnesota voters tend to be rebellious and we look for candidates who are out of the box, anti-Washington and anti-establishment,” Anderson said. “And I think you have that in Donald Trump.”

DFL Party Chairman Ken Martin said he wouldn’t be shocked to see a close race, nationally or in Minnesota.

“I don’t think anyone who lived in Minnesota through the 1998 election should be dismissive of Donald Trump,” Martin said. “We certainly see on a daily basis things that would make you think disqualify him as a major candidate for president. But every step of the way he’s proven us wrong.”

There are some in the Republican delegation who openly admit it would be a lost cause for Trump to devote much effort to Minnesota when other pivotal states are in reach.

“Let’s put it this way,” said Jim Carson, a Cruz delegate from White Bear Lake, “if he wins Minnesota it’s going to be the worst washout since Reagan, since ‘84. No — he’s going to lose Minnesota.”

Minnesota was the only state to go for native son Democrat Walter Mondale in 1984.