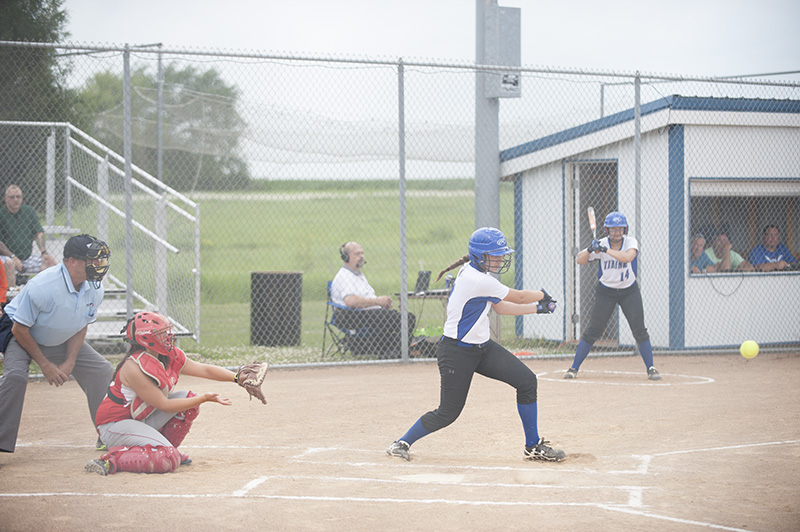 Northwood-Kensett freshman Laura Hopperstad makes contact with a pitch during Tueday’s game against West Hancock. She finished the game with two hits, two walks and a stolen base. Jarrod Peterson/Albert Lea Tribune

The stakes are always higher when the playoffs roll around.

It was no different when Northwood-Kensett hosted West Hancock Tuesday night.

The Vikings built a 6-1 lead before losing it in the sixth inning when the Eagles scored six runs to take a 12-6 lead.

As the storms started to roll in, the Vikings’ bats started to pick up. They scored seven runs in the bottom half of the sixth inning to take the lead before the game was called due to weather. It gave the Vikings a 13-12 win in six innings.

Dusti Bratrud got the start for the Vikings. She held the Eagles scoreless until the fourth inning when she gave up a homer Alyssa Klepoch.

The Vikings got that run back and then some in the bottom of the inning.

Bratrud singled to lead off the inning. After a walk and a couple of wild pitches, another run came in to score.

After a strikeout and another walk, senior Shelby Low got a pitch she could handle and smacked a two-run double to the gap in left center.

That gave Bratrud and the Vikings a 6-1 lead. 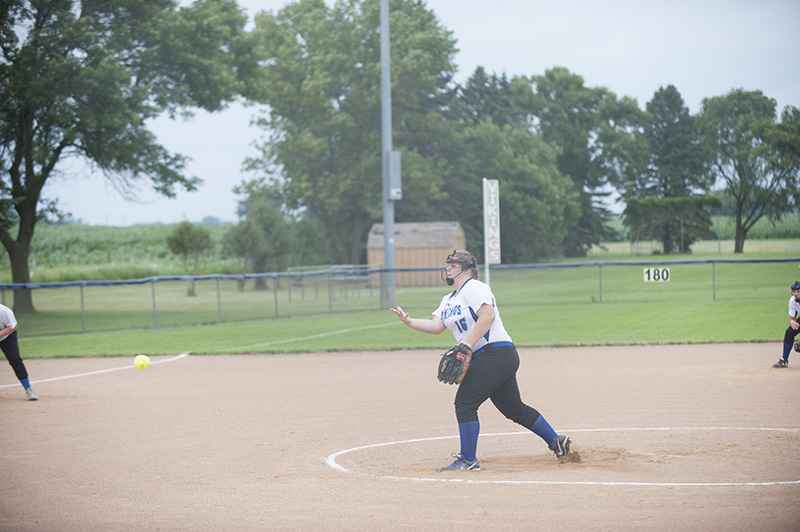 Vikings pitcher Dusti Bratrud throws a pitch in the second inning of Tuesday’s playoff game against the West Hancock Eagles. She threw a complete game and got the win.

However, the Eagles (1-24) showed a lot resilience.

With one out, they had runners on first and second. Madison Eisenman hit a one-run double, then Klepoch followed with a two-run double.

The Eagles would end up tying the game, then they would take the lead with a huge sixth inning that included two RBIs for Klepoch and Sydney Zamago, and one RBI for Eisenman.

The Vikings showed their resolve in the bottom of the inning when they got hits from a number of players and plated seven runs to win the game.