A Wells man is facing prison time after being charged with two counts of first-degree criminal sexual conduct in Faribault County.

Samuel Adam Johnson, 20, was also charged earlier this month with one count of first-degree burglary. 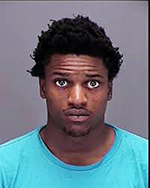 Johnson reportedly broke into a residence and sexually assaulted a woman July 3 in Wells.

Court documents state before the alleged incident, Johnson sent a Snapchat message to the alleged victim telling her he wanted to come over. She reportedly told him she barely knew him and did not want him to come over.

Johnson reportedly said he knew the window to her room and was going to come over anyway.

Court documents state that Johnson “appeared very nervous” when officers later went to his residence. He reportedly claimed he did not know where he had been earlier in the day and denied knowledge of the alleged sexual assault.

After being arrested and transported to Faribault County Law Enforcement Center, Johnson reportedly admitted to going to the alleged victim’s residence and using the roof to crawl into her window, court records state. He also reportedly admitted to having sexual intercourse with the alleged victim. He said he thought his actions were permissible because she was older than 18, court records state.

Johnson’s next court appearance is scheduled for Monday.

First-degree burglary carries a maximum sentence of 20 years in prison, a $35,000 fine and a mandatory minimum six-month sentence.