Wildflowers planted to aid bees may now be crippling them 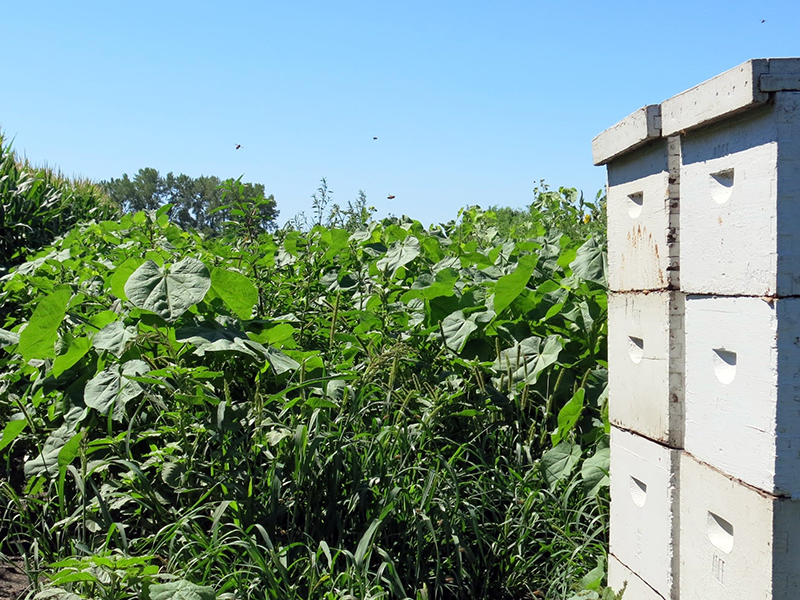 Bees fly in and out of a hive in a research plot near Brookings, South Dakota, on July 31, 2015. A recently published study says insecticides from crops may harm bees feeding on wildflowers near farm fields. - Dan Gunderson/MPR News

Swaths of Midwestern wildflowers planted by well-meaning governments and nonprofits to attract bees may be inadvertently harming them.

That’s the surprising finding of a new scientific study that concludes a bee-killing pesticide carried by wind or water from nearby farms is landing on the wildflowers, putting pollinators at risk.

Scientists spent two years examining wildflower plots planted around Brookings. Testing for the presence of clothianidin, a neonicotinoid insecticide commonly used in corn growing, they consistently found the insecticide on the wildflowers — even in those planted on organic farms where no pesticides are used.

“I was actually really surprised because we were using organic sites as control sites. We certainly weren’t expecting to see any there,” said entomologist Chrissy Mogren. “Organic growers have to have a 30-foot buffer between their field and other conventional fields to help mitigate that. We can only assume that it’s probably drifting in.”

Bees pollinate most of the fruits and vegetables we eat, so the fragile health of bee colonies has been a major concern. Honey bees have been dying this decade at a rate experts call unsustainable. Last year Minnesota beekeepers reported losing half of their bee colonies.

Experts said bees are in trouble for many reasons, including rapidly spreading diseases, not enough flowering plants on the landscape to provide adequate nutrition, and increasing use of insecticides on crops, which is why the South Dakota research is important.

Mogren, a Louisiana State University scientist who conducted the bee research while working for the United States Department of Agriculture, also gathered data on the health of the bees feeding on the wildflower strips. She tested the pollen and nectar bees use for food and found very low levels of insecticide.

While it wasn’t concentrated enough to kill the bees, researchers found it was potentially damaging to the creatures’ nutritional health. The more insecticide in the bee food, the less energy bees stored in the form of glycogen and lipids.

“If those efforts are being compromised by some of these pesticides showing up where they don’t belong, that has really important implications for how we can proceed forward,” said Lundgren, a former USDA scientist who believes the department retaliated against him for his prior research on pollinators and insecticides.

“It’s not just plant it and see the benefits of it anymore,” he added. “It’s how do we preserve those plantings from potential contamination.”

Still, the researchers said the findings do not mean farmers should stop planting pollinator habitat.