Woman faces prison after DWI with child in the car

A Hartland woman is facing prison time after being charged in Freeborn County District Court with two counts of criminal vehicular operation.

Amber Rose Anderson, 29, has also been charged with two counts of second-degree driving while intoxicated and one count of not having a fastened child passenger restraint system for a child under 8 years old and under 57 inches tall.

Her first appearance on the charges was Thursday. 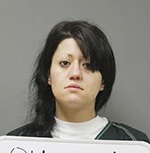 Upon arriving, a deputy reportedly observed a vehicle in the ditch on the east side of the road occupied by two people.

Anderson — the driver of the vehicle — was found sitting in the driver’s seat of the vehicle. She was emotionally distraught and had a cut on her lip and above her right eye, court documents state.

She was described as disoriented and was reportedly not able to tell deputies what time of day it was, and said she did not know what had happened and couldn’t give a reason for why she drove off the roadway.

Court documents state Anderson admitted to drinking vodka and told her boyfriend that she had a couple glasses of wine, as well.

A faint odor of alcohol was observed on Anderson’s breath, according to court documents. Court documents also state Anderson had a .152 blood alcohol content on a preliminary breath test and a .214 BAC when a blood draw was conducted at about 6:20 p.m.

Anderson’s daughter — described as 6 years old and 3 feet, 2 inches tall — had reportedly been riding in the front passenger seat without a booster seat. Her daughter reportedly suffered an ankle fracture — described as serious bodily harm in court documents — from the crash.

Her next appearance in court on the charges is scheduled for Aug. 11.

Criminal vehicular operation carries a maximum sentence of three years in prison and a $10,000 fine.