According to a court complaint, Mower County deputies pulled the two over at 1:17 a.m. Aug. 10 in a 1999 Chevy Silverado after clocking it going 53 mph in a 70 mph zone on Interstate 90 and driving over the fog line. 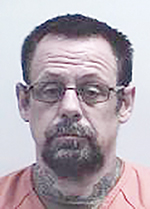 Johnston, the driver, complained her poor driving was due to her being tired and bothered by other headlights, but deputies observed signs she may have been under the influence of a controlled substance.

Ward also began sweating heavily and answering questions directed at Johnston, his girlfriend, while denying they were using drugs and saying they were headed to Sturgis, South Dakota.

She failed three of four field sobriety tests and was detained.

Deputies then found $5,746 in Ward’s pockets and 23.29 grams of methamphetamine and 2.8 grams of cocaine in the glove compartment.

Then officers found a leopardskin print case with 3.8 grams of marijuana, rolling papers and a snorting tube.

Ward initially told deputies that he owned all the drugs and put the drugs in Johnston’s purse, but she later admitted they bought the meth together and each owned the drugs, while the pills and marijuana in her purse were hers. She admitted to taking Alprazolam and marijuana before driving, according to the complaint.