Agnes Viola Haney was born on the old Haney homestead northwest of Austin on Dec. 18, 1919. She was the daughter of Leonard and Vera (Dugaw) Haney.  Agnes attended Woodland country school and graduated from Austin High School in 1937. As a youth she was active in 4-H and later became an adult leader.

On June 22, 1941, Agnes and Ralph Waters were united in marriage at her parents’ home in rural Austin. The couple was blessed with four children. Agnes enjoyed her life as a homemaker raising her children. She worked hard on the farm with her husband and parents and also worked as a cook at a local restaurant. In later years, she retired to take care of her aging parents for several years.  A member of St. Olaf Lutheran Church, Agnes served as a chairperson of her Country Circle for a number of years. She loved to cook, enjoyed traveling and attending her grandchildren’s sports activities, and loved family get-togethers. There was always plenty of Agnes’ food for everyone to take home after a gathering. She will be remembered for her famous chocolate cake and boiled frosting. Agnes will be greatly missed, but her memory will always be carried in her family’s hearts. 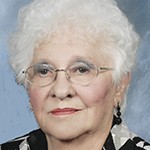 Agnes was preceded in death by her parents Leonard and Vera Haney; her husband, Ralph Waters; Ralph’s parents Mark and Nora Waters; her son-in-law, William Renwick; and brothers-in-law, aunts, uncles and several other relatives and friends.

Funeral services will be at 11 a.m. Monday at the Worlein Funeral Home Chapel in Austin with Todd Portinga, Associate in Ministry, officiating. Visitation is from 4 to 6 p.m. today at Worlein Funeral Home and one hour prior to the service on Monday. Interment will be in Oakwood Cemetery. Memorials can be directed to the recipient of donor’s choice. Worlein Funeral Home of Austin is assisting the family with arrangements. Condolences may be expressed to the family online at www.worlein.com.