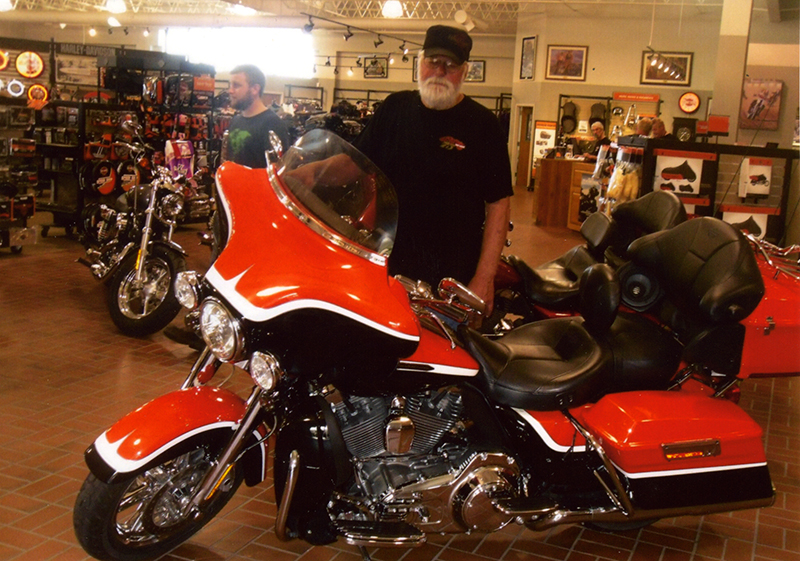 Local residents traveling on I-90 this past week north of Albert Lea may have noticed an increase in westward bound motorcycle traffic.  This week will show an even larger increase in motor cycle traffic as most of the motorcycles are headed to Sturgis, South Dakota, for the 76th Sturgis Motorcycle Rally which is an annual rally held during the first full week in August.  This year’s rally is expected to draw up to 700,000 visitors.

Even though Albert Lea is hundreds of miles east of Sturgis, the city economically benefits in many ways from the I-90 cycle traffic turning off on the Bridge Avenue exit as the visitors stop for gas, food, lodging, motor cycle repairs and even some sight – seeing of the city.

One of the main local businesses that attract up to a 100 motorcycle visitors a day – prior, during and after the Sturgis Rally ends is the local Harley – Davidson dealer, Bergdale Harley – Davidson located at 905 Plaza St., which has been in business since 1985.

Duane Bergdale, the owner of the dealership, says that Albert Lea is a good rest stop for the Sturgis bound motorcyclists as they are right next to the I-90 freeway with the next best westward bound stop being Sioux Falls, South Dakota.  As the majority of the motors cycles heading to Sturgis Rally are Harley – Davidsons, a natural stop for many of the riders are Harley – Davidson dealers.

For more than 30 years, Bergdales has offered the visiting Sturgis bound cyclists a good relaxing rest stop with an assortment of free popcorn, pastries, refreshments, and a corn feed which was Aug. 6.  Besides the free items offered, many visitors will have service work done of their cycles and will often purchase Harley – Davidson clothing, accessories and novelty items.

Sturgis bound cyclists come from most every state with many eastern and Southern state riders naturally riding past Albert Lea via I-35 and I-90.  Many visitors stopping at Bergdale make Albert Lea an annual rest stop and even have become friends with many of their employees.  Also visitors come from Canada and foreign countries such as Germany, South Africa, Spain and France just to name a few.

When the Sturgis rally ends Sunday, many of the motorcycle riders who stopped in Albert Lea on their ride to the rally, will again stop at Bergdale on their return home.