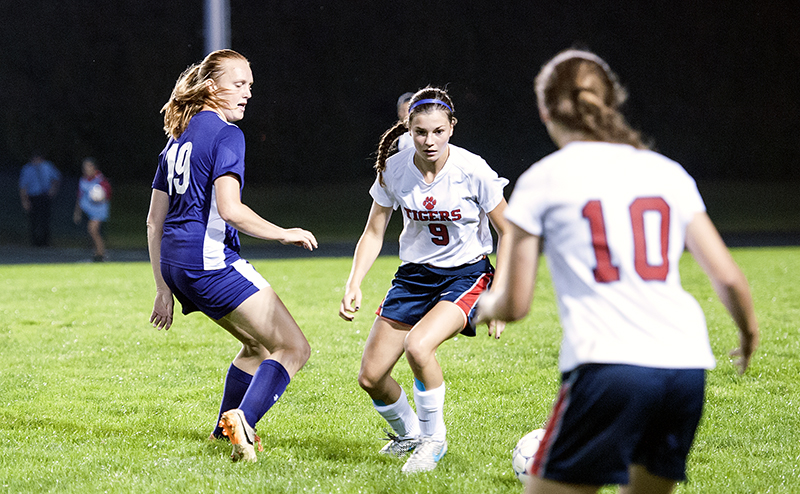 Rachel Rehnelt of Albert Lea passes the ball to Turena Schultz during a home game at Jim Gustafson Field in 2015. Rehnelt had an assist in Saturday’s match against Bloomington Kennedy. -Micah Bader/Albert Lea Tribune

In just the first game of the season, the Albert Lea girls’ soccer team already accomplished something it never had done — beating Bloomington Kennedy.

The Tigers got a shutout performance from goalie Kathryn Flaherty in a 2-0 victory on the road Saturday afternoon.

“Each and every player carried out their role and played with high intensity,” said Tigers coach Laura Wangen.

After a back and forth first half, eighth-grader Lucy Sherman got free from the defense and scored her first career varsity goal with a left-footed shot into the lower left corner of the goal.

Wangen liked how her team played, especially when it played on an unfamiliar surface.

“Playing on turf means the ball comes at you a little bit faster,” Wangen said. “But we were still able to set the pace and kept control of the game with connected passing.”

The victory gets the Tigers off to a 1-0 start on the season, and the two goals were the most goals scored by the Tigers against the Eagles in the last five matchups combined.

Prior to that, the Eagles had shutout the Tigers four of the five matches.

Start time for the match is set for 7 p.m.