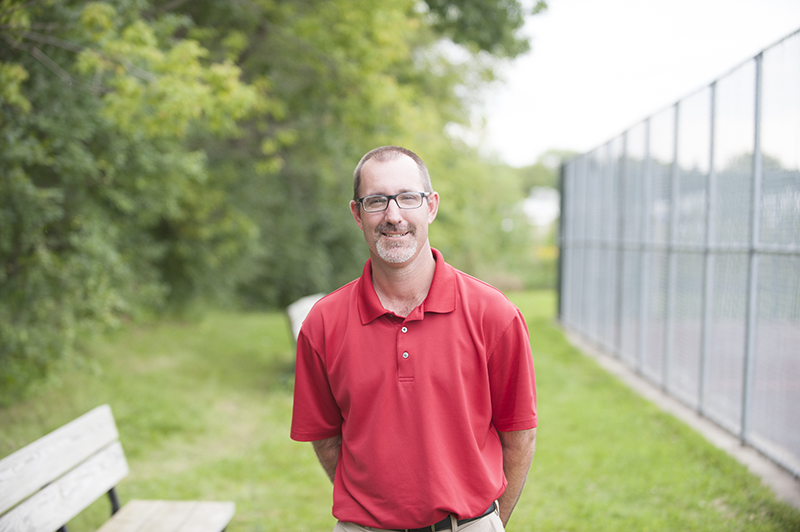 Chris Withers is in his sixth year as a tennis coach, but it’s his first year as a head coach of the Albert Lea girls’ tennis team. - Jarrod Peterson/Albert Lea Tribune.

Chris Withers isn’t new to Albert Lea. He has lived in town since 2010, where he is also a ninth-grade physical education teacher at Albert Lea High School.

However, he is new to something this fall — head coach of the girls’ tennis team.

“This is something I have very little experience in,”Withers said. “I was kind of asked to coach the team, and I accepted it. I viewed it as an opportunity.”

Withers spent time teaching in Red Wing, Las Vegas and the Anoka-Hennepin School District before applying for a job in Albert Lea.

He helped out with the boys’ tennis team right from the start. Coming into his sixth season, this is his first one as head coach, and it’s something he has enjoyed so far.

“Being an assistant coach, you never really learn what all goes on behind the scenes,” he said. “In my first few weeks, I have found that out. The importance of organization is crucial, promoting the sport and being on your toes is something I have learned in my first few weeks.”

Like most teachers who coach athletics, Withers wants tennis to involve life lessons — such as not giving up, leading by example and having a positive attitude.

“The girls have been great in the early weeks of the season,” he said. “They are open to learning, and they have even taught me some things I didn’t know. With tennis not being my forté, I have had to do some studying up on the sport so I can keep the girls engaged and learning throughout practices.”

“I am definitely outside of my comfort zone, but it’s something that we all need to do once in awhile,” he said.

Outside of tennis, Withers has a family of four — his wife, Brooke, who is a paraeducator at Halverson Elementary School; and two daughters, Laura, 6, and Lexi, 4.

One of Withers’ goals for the season was to improve, and the Tigers seem to be on their way to doing just that.

After winning two matches last season, the Tigers are off to a 1-1 start.

Every day, Withers grows a little more comfortable being the head man of a sport with which he isn’t too familiar. But stepping outside his box is something that is helping him grasp new knowledge.

“To date, coaching tennis has been my biggest professional risk,” he said. “However, it has been great so far, and the girls have been awesome.”

While tennis is a sport where you have to keep the ball between the lines, life is the exact opposite.