Are primary losses a warning shot for some Minnesota lawmakers? 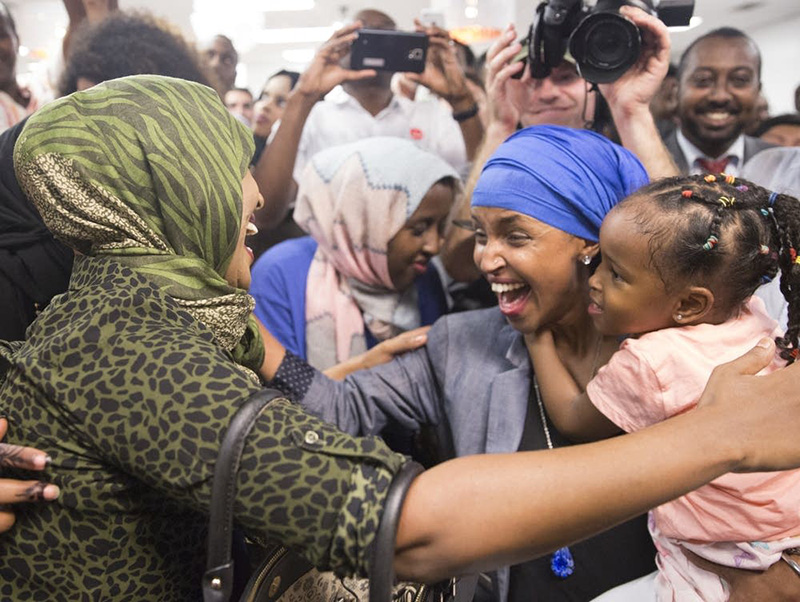 Ilhan Omar holds her daughter and hugs a supporter of her campaign, Tuesday at Kalsan Restaurant in Minneapolis. - Chris Juhn/For MPR News

Four state lawmakers boasting a combined 94 years of legislative experience were beaten by political upstarts in Tuesday’s primaries. Was it an anomaly or a sign that incumbents are in trouble this November?

That’s the question Minnesota political party leaders and others are working through as the general election campaign gets underway. They have about 90 days to find out.

Some observers urge caution in drawing conclusions, saying unique circumstances surrounded each of the incumbents who fell.

Winners in those contests, however, say it was clear to them that voters were hungry for change. One key Minnesota House lawmaker is warning colleagues to take nothing for granted.

“It’s a very unpredictable year,” said Rep. Matt Dean, R-Dellwood, a former House majority leader who is in his eighth legislative campaign, all but the first of which were victories. He’s been traveling the state to help other Republicans and has picked up on voter frustration directed at both parties.

“Everybody, every Minnesota House rep, all of my friends, I’m really encouraging them to get out and run it like it’s your first race because turnout could be very different this year.”

Two of the four lawmakers who were defeated Tuesday — DFL Minneapolis Reps. Phyllis Kahn and Joe Mullery — struggled to keep up with their districts’ rapidly shifting demographics. Fast-growing minority and new immigrant communities in Minneapolis are flexing more political muscle and sought new faces to represent them.

IIhan Omar, the community activist who defeated Kahn, was born in Somalia and fled with her family during that country’s civil war. Fue Lee, who beat veteran legislator Mullery, is a Capitol staffer who was born in a Thailand refugee camp and settled in Minneapolis as a young boy.

The two other incumbents losing Tuesday — Republican Rep. Tom Hackbarth of Cedar and Republican Sen. Sean Nienow of Cambridge — entered their primaries without the Republican Party’s endorsement, each having dealt with personal troubles in recent years. Hackbarth lost to business owner Cal Bahr and Nienow to sales manager Mark Koran.

“We didn’t misread the political environment,” said Koran, adding that voters felt the “need to run somebody new, who could win and is going to work hard, campaigning up through the endorsement as well as through the primary and again on into November.”

The uncertainties of the presidential election make it even harder to judge what voters might do in November. Republican Donald Trump and Democrat Hillary Clinton will top the ticket as the presidential contenders. Both have high unfavorable ratings. A big question is whether turnout will be depressed because voters are annoyed or be driven up by a desire to deny the other party’s nominee the Oval Office.

Democrats see an opening to retake the Minnesota House, which has flipped between Democrats and Republicans the past three elections. Another control shift would require a net change of seven seats.

House Minority Leader Paul Thissen, DFL-Minneapolis, believes that at least on the state level, voter mood and energy is on his party’s side.

“It’s one of those election years where we are seeing this interest in change and an interest in moving in new directions,” he said.

But if it really is a change election, House Democrats have some reason to worry, said Darin Broton, who’s has advised Democratic candidates in the past but doesn’t have a direct role in this year’s campaign.

“Democrats are running a lot of candidates, particularly in greater Minnesota, who lost two years ago,” he said. “Do voters want to send people back to St. Paul that they fired once before?”