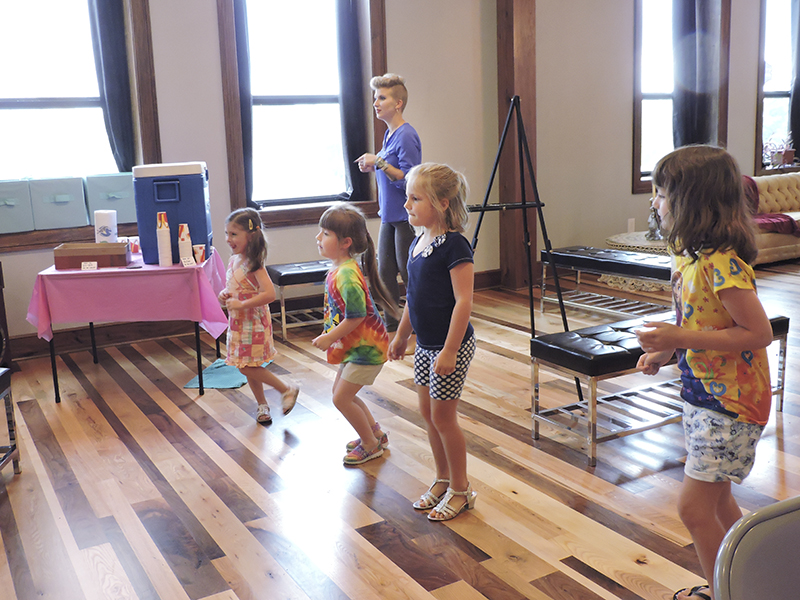 Along with painting, some of the children participating in the Art and Healing Day for Sophie had the opportunity to dance with Holly Karsjens on Saturday at The Meraki Studios. - Kelly Wassenberg/Albert Lea Tribune

A sense of urgency, the lingering question of “What can I do?” and a feeling of helplessness. These were just a few of the emotions that shot through Holly Karsjens after learning of 8-year-old Sophie Stultz’s death last month.

Sophie Stultz died July 2 after being hit by a car while riding her bicycle at the intersection of Frank Hall Drive and East Eighth Street in Albert Lea.

Karsjens’ desire to act was immediate, but she proceeded with caution by speaking with Rachel Cline, one of the dance moms at her studio. As someone who doesn’t have children of her own, Karsjens — owner of  The Meraki Studios in downtown Albert Lea — sought a parent’s perspective on the most beneficial way to help children in the community cope with such a loss.

Her initial thoughts included having a craft project the camp kids at her studio could do while waiting to participate in the Third of July Parade. The idea was quickly abandoned. Karsjens said she didn’t want to start a conversation with a child that their parents had not yet had the opportunity to have with them. 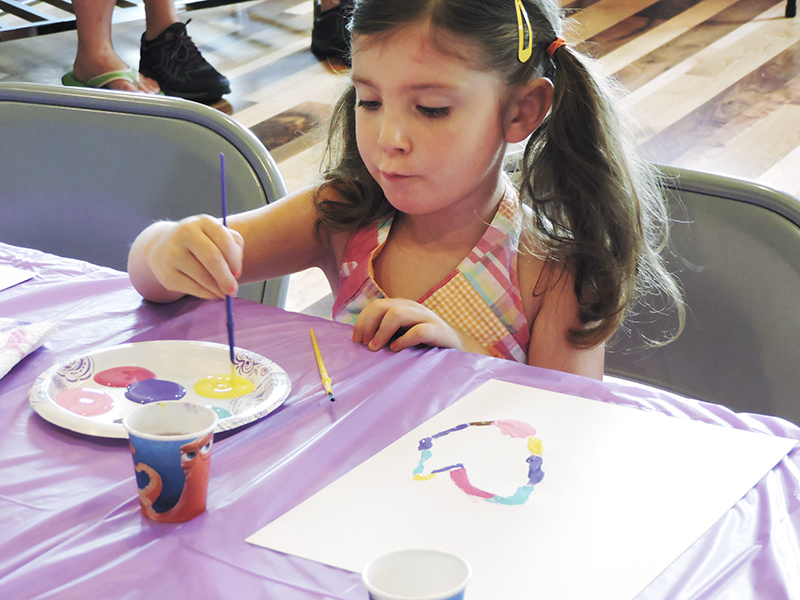 Laina LaFrance, 5, paints during the Art and Healing Day for Sophie. Her mother, Nicole, volunteered at the event. – Kelly Wassenberg/Albert Lea Tribune

The delay in planning allowed Karsjens to collaborate further with Cline and resulted in the scope of the event being widened to reach children throughout the community instead of just those who utilize Karsjens’ studio.

The Art and Healing Day for Sophie took place on Saturday at Karsjens’ studio in two parts. The Crisis Response Team of Freeborn County led a confidential intervention for those who had signed up for a separate grief portion of the event. The second part of the day was an open house from 2 to 4 p.m., which was open to anyone in the community.

Acrylic paints, paper and painting supplies were provided, but children were left to find inspiration for their paintings inside themselves, Karsjens said.

“Adults, when we are not given this end goal, we are at a block,” Karsjens said. “We don’t know what to paint. We don’t know what we should be feeling. Kids wear their feelings a lot closer to the surface than what we do.”

Karsjens said she feels that level of transparency leaves children more open to receiving the therapeutic benefits of art.

“It’s good to be able to celebrate Sophie rather than just focusing on the sadness,” she said. Boettcher attended the event with her 8-year-old daughter, Emily, who had been friends with Sophie since preschool.

About two dozen children in total attended the event, according to Karsjens, who had over a dozen volunteers on hand to help, as well. Many of the volunteers were The Meraki Studios moms like Cline and Nicole LaFrance, whose son was also a classmate of Sophie’s.

Jeannie Kearney and her husband, Keith, are neighbors of Karsjens and said they welcomed the opportunity to pitch in.

“Just in talking with her, we know she is such an advocate for helping the community, so anytime she asks for volunteers my husband and I just love to jump on board,” Kearney said. The former teacher who now works as a librarian at Riverland Community College also appreciates the healing power of art.

“I think for a lot of kids, they struggle to put their emotions and their feelings into words,” she said.

Kearney said that by giving a child a blank canvas, they get a much-needed outlet in return.

Each of the pieces of artwork created throughout the Art and Healing Day for Sophie was photographed by Karsjens, who plans to put the pieces together in a hardcover book for the Stultz family.