Funeral services for Beverly J. Sutton will be at 2 p.m. Tuesday at First Lutheran Church in Albert Lea. The Rev. John Holt will officiate. Visitation will take place from 5 to 7 p.m. today at Bonnerup Funeral Service in Albert Lea and one hour prior to services at the church. 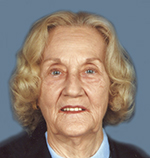 Beverly Jean Knudson Sutton, daughter of Eva (Quisley) and Amos Knudson, was born July 4, 1934, in Albert Lea. She was baptized at the Silver Lake Church in Northwood and confirmed at First Lutheran Church in Albert Lea. She attended Albert Lea schools and graduated in 1952. She was active in school publications, drama and 4-H activities. She attended the University of Minnesota and graduated with a Bachelor of Science degree in home economics. She was active in her sorority, Alpha Gamma Delta, and other events on the St. Paul campus. She taught home economics and science at Rudd High School in Rudd, Iowa, and then returned to her hometown to teach at the Albert Lea High School for two years.

She married Albert F. Sutton on June 7, 1959, at First Lutheran Church in Albert Lea and continued to teach at Ellsworth High School. The first of three children, Thomas, was born while they lived in Jewell, Iowa, where her husband taught and coached athletics. While they lived in LaPorte City, Iowa, the second and third children were born, Daniel and Patrice. The family later moved to Emmetsburg, Iowa, where all the children graduated.

Beverly was a substitute teacher in schools in Jewell and Ruthven, Iowa, and then taught at Ruthven and Emmetsburg schools. She was a devoted mother and attended all the children’s school and athletic activities. In Emmetsburg, she belonged to Bethany Lutheran Church, where she taught Sunday school and was active in circle and in the women’s organization. Upon retiring, Bev and Al moved to Albert Lea. They enjoyed twelve years of working at the Target Center in Minneapolis at all types of events. Also during her retirement, she enjoyed being an election judge and working for the Census Bureau.

She is survived by her husband, Al; her brother and his wife, Richard and Rhoda Knudson  of Albert Lea; her three children, Thomas of Seattle, Daniel and wife, Theresa, of Denver and Patrice of Chicago; and three grandchildren; J.D. and Whitney Sutton of Kansas City, Kansas, and Bryan Burger of Chicago.

In lieu of flowers, donations are preferred to Peace & Power at First Lutheran Church in Albert Lea.