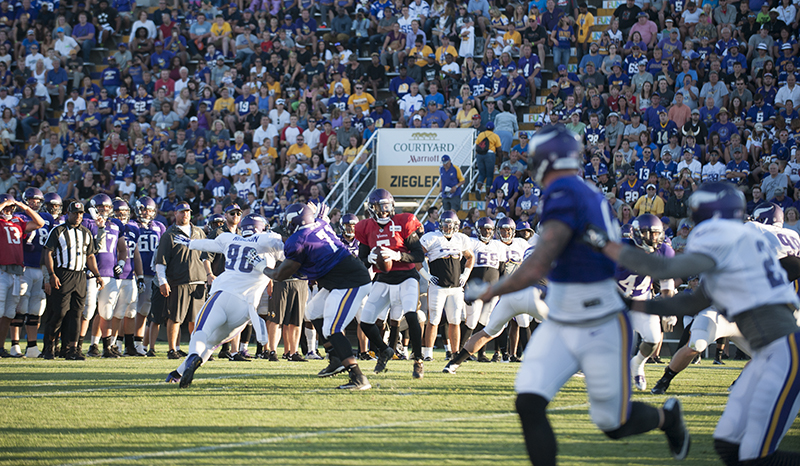 Quarterback Teddy Bridgewater steps up in the pocket and looks for a receiver during an Aug. 6 scrimmage. Bridgewater played two series in Minnesota’s preseason win over Cincinnati Friday, going 6-7 for 92 yards and one touchdown. Jarrod Peterson/Albert Lea Tribun

Andy Dalton was sharp in his return, leading the Cincinnati Bengals into field-goal range on his only drive during the Minnesota Vikings’ 17-16 preseason victory Friday night.

Dalton’s season ended at Paul Brown Stadium last Dec. 13 when he broke the thumb on his passing hand while making a tackle during an interception return.

On Friday night, he completed his first four passes for 32 yards. He threw too high for A.J. Green on a third-down play, and Mike Nugent was wide right on a 48-yard field-goal attempt that ended the drive and Dalton’s day.

The teams held joint practices in Cincinnati the past two days, with the Vikings’ defense getting pressure on Dalton. He had plenty of time to complete quick throws in his limited stint on Friday.

Cincinnati’s starting defense was in for only one series that lasted three plays. Tackle Geno Atkins chased Teddy Bridgewater out of the pocket on one play, and then sacked him on the next. Those were the Vikings’ only plays in the opening quarter.

Facing the second-team defense on the next series, Bridgewater threw a 49-yard touchdown pass to Charles Johnson that completed a 96-yard drive. Bridgewater played two series and was 6 of 7 for 92 yards.

A long way for nothing

AJ McCarron led the Bengals on a 22-play, 89-yard drive the second time Cincinnati got the ball. The drive lasted 12 minutes, 24 seconds and ended with the Bengals coming up short on fourth-and-1 at the 3.

Minnesota’s Blair Walsh kicked a 51-yard field goal on the final play of the first half, the ball landing on the crossbar and bouncing through.

Vikings: First-round pick Laquon Treadwell, a receiver from Mississippi, had a team-high four catches for 41 yards.

Bengals: Tyler Boyd made a nice, over-the-shoulder catch for a 40-yard gain that set up a touchdown, the only catch by the second-round pick. “Nothing really too special about it,” Boyd said. “Just a basic route that we’ve been running a lot in practice.” … Undrafted Alex Erickson returned a punt 80 yards for a touchdown with 2:45 left.

Vikings: CB Trae Waynes, Minnesota’s first-round pick last year, started in place of the injured Terence Newman and had a solid showing. He broke up a long pass to Boyd, and quickly tackled receiver Cody Core after a catch, preventing a first down, one of his four tackles in the game. “I feel a lot more comfortable going into my second season,” Waynes said.

Bengals: With their top two tight ends hurt — Tyler Eifert and Tyler Kroft — their reserves were reduced to blocking roles.

Vikings: RB Adrian Peterson was among those held out. He suffered a hamstring pull while working out before the start of training camp.

Bengals: RB Jeremy Hill hurt his left hand in the first quarter, had it examined and stayed on the sideline but didn’t return.

Vikings: Treadwell, on his first NFL game: “It felt great to be out there. It was actually a lot of fun.”

Bengals: DE Carlos Dunlap, on the starting defense’s limited time on the field: “It was just three plays, but that’s all we wanted to play because we knew the (starters) probably were going to get only one possession.”