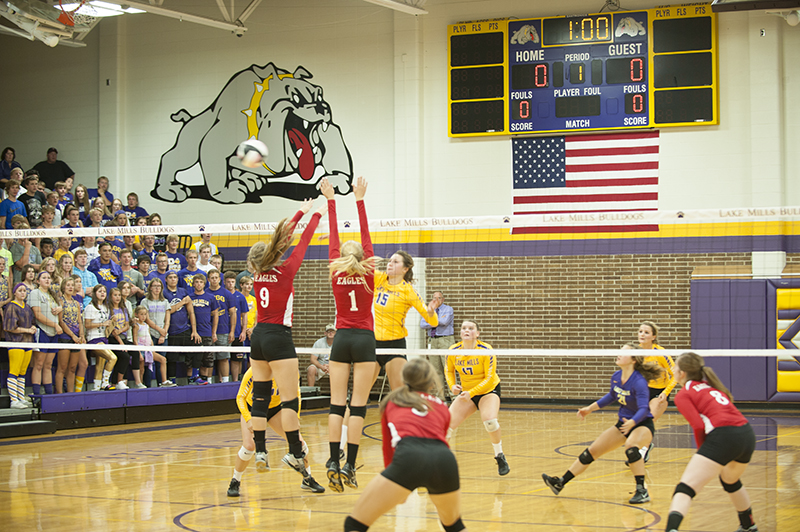 LAKE MILLS — The Lake Mills Bulldogs came into its first match of the season ranked No. 6 in Class 2A in volleyball.

The Bulldogs are an upperclassmen-led team, and that experience certainly helped them against the West Hancock Eagles Thursday night.

The Bulldogs had their way with the Eagles early and often, winning all three sets by big margins, as this match was completed in a little over 45 minutes.

Lake Mills raced out to a 7-2 lead, prompting West Hancock coach Jennifer Hammer to call a timeout to see if she could calm her team down. 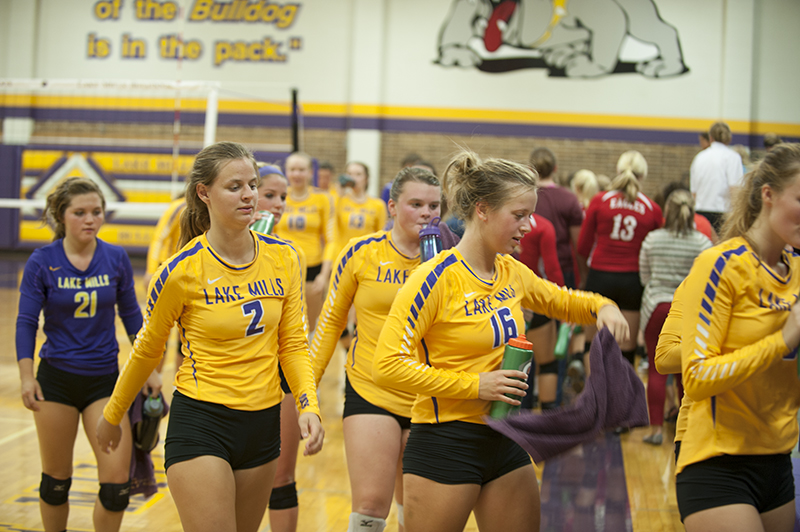 Emerald Gau (2) and Ashley Groe head to the bench between sets Thursday night in Lake Mills’ home-opening volleyball match against West Hancock. The Bulldogs beat the Eagles in the three sets.

The Bulldogs continued to take advantage of mistakes made by the Eagles, and stretched the lead to 16-4, then 23-5 before winning the first set 25-6.

Junior Mallory Wilhelm had a huge spike for the Bulldogs’ 24th point in the set that got a loud reaction from her teammates and some “ohhs” and “aahs” from the opposing fans.

The Bulldogs won the second set easily, 25-3, and West Hancock made the third set a little tougher, but Lake Mills still took it, 25-8.

“I was very pleased with how we played,” said Bulldogs coach Jim Boehmer. “We set some individual goals with the focus on getting better as individuals and as a team. We were able to accomplish most of those goals.”

Lexi Groe led the Bulldogs’ offensive attack with nine kills. Teah Kesler finished with eight kills, and the team as a whole had a total of 27.

Robyn Bowman notched 24 assists, and Lake Mills finished with 11 aces on the night, led by Hailey Borgmeyer, who finished with five. Bowman and Dana Baumann each had three.

It was a strong start for a team that is expecting big things for this season, even though the Bulldogs only returned two players from last year’s rotation.

“I’m glad we were able to start strong,” said Boehmer. “We have a lot of new faces on the floor, but we feel we have skilled kids stepping up to make a name for themselves. As far as opening nights go, I am pleased.”