So many attributes describe this woman, whose unique character, endless energy and selflessness were well-known and adored by many.

Dolly Irene Jones Sichko was born July 2, 1928, in Albert Lea to Irene and Paul Jones, who nurtured her spunkiness and instilled strength and values. Dolly’s zest and goodness stemmed from her roots as a Hollandale girl. She never moved far from the place she loved because she was a true farmer’s daughter who believed in working hard, helping your neighbor and supporting your community. 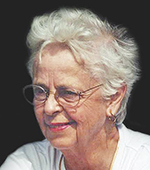 Education was a joy and priority for Dolly, whose intelligence shone throughout her life. She attended grade school in Hollandale, St. Theodore Catholic School and graduated from Albert Lea Senior High School. Dolly also cherished her days at Stephens College in Columbia, Missouri. She stayed close to her friends from school days and organized and relished many reunions because of her belief in tradition and lifelong bonds.

Dolly was cherished by all who knew her because of Dolly’s most recognized trait — her ability to talk with an ever-present intention of making the day more enjoyable. Every day, she engaged people around her in conversations about their hopes and happenings. Her cheerful demeanor made people happy and she knew many people.

Dolly was an ardent sports fan, especially for hockey and baseball. She even married a good-looking baseball player, Michael Sichko, on Oct. 27, 1956, at St. Theodore Catholic Church. Dolly often said that the best thing that she and Mike did was raise four children: Paul, Peter, Mary and Martha. Dolly had a one-of-a-kind relationship with each of her children. If the definition of a good mother is having all your kids adore you, then she succeeded in spades.

Dolly wrapped herself in her Catholic faith for unending comfort. Unwavering belief rested with her prayer books and rosary.

Dolly gave her heart and soul when helping and serving others. She was treasurer of Albert Lea Community Theater for years, supported Lea College, participated in Church Woman United, drove for Meals on the Go, signed up for innumerable homeroom mother shifts, raised funds for American Lung and Heart Association and spent countless hours and decades volunteering for Naeve Hospital Auxiliary. She found great comfort in her Old Shoreland Heights neighborhood. Dolly was the matriarch of Lee Place, where people looked after her and she looked after them. She also loved her YMCA swim club friends and their luncheons as they were so special to her.

Other favorites included Gull Lake, cruises, golfing, biking, knitting, sewing, golfing, traveling, collecting teddy bears and dolls and decorating for every holiday. Her hands produced the most beautiful things that became presents to so many people.

She loved her birds, Charlie and Kelly, and her beloved dogs, Candy, Casey, Louie, Stella and Mollie.

Dolly contained so much good in one petite person, which is why she is Dolly the good talker, Catholic, daughter, neighbor, homemaker, sports fan, wife and mother.

Dolly is survived by her children, Paul Sichko of Dallas; Peter Sichko and his wife, Colleen, of Eagan; Mary Sichko Maloy and her husband, Sam, of Alpharetta, Georgia; and Martha Jones Sichko of Edina. Also surviving are her grandchildren Danielle, Lauren, Alex and Paige. Dolly also considered herself a mother to Mark Kruse, Todd Kriewall, Scott Gordon, Mike Ellis and Linda Egge Pederson.