Memorial services for Dorothy Snider will be at 11 a.m. Thursday at St. Theodore Catholic Church. The Rev. Russ Scepaniak will officiate. Interment will be in St. Theodore Catholic Cemetery. Visitation will be from 5 to 7 p.m. Wednesday at Bonnerup Funeral Service in Albert Lea and again one hour prior to the service at church.

Dorothy Mae (McNulty) Snider passed away Wednesday, Aug. 10, 2016, at Three Links Reflections Hospice in Northfield at the age of 89.

She was born Feb. 28, 1927, in Lena, Illinois, to Stephen and Luellen McNulty. The family was separated at the death of their mother when Dorothy was 4 years old. She attended through first grade in Lena and then was brought to Minnesota. Years later the siblings reunited and had many wonderful family gatherings in Illinois. 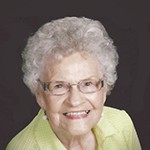 Dorothy and her husband, Wayne, came to Albert Lea in 1957 and spent many joy-filled years raising their family and cultivating lifelong friendships. Wayne died in September 1989.

Dorothy worked 10 years at National Foods and 30 years at Security Bank. She was a member of St. Theodore Catholic Church, Naeve Hospital Auxiliary and the American Legion Auxiliary. She enjoyed her volunteer work after retiring.