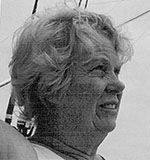 Betty was born Aug. 20, 1932, in Philadelphia, the daughter of William E. and Frances E. Quigley Morningred. She graduated from Germantown High School and went on to secretary school. In May 1955 she married George Dickson in St. Peter’s Episcopal Church in Germantown, Pennsylvania. After relocating from Philadelphia to Florida to Indiana, the family settled in the Alden area, where George was working for Queen Products in Albert Lea. Betty worked for MSI Insurance for Wayne Pooley for many years before retiring to the Chicago area and later returning home to where they opened Tailfins Malt shop in Alden.

She was preceeded in death by her husband; parents; siblings; and granddaughter, Mackenzie Dickson of Wisconsin. A family service will take place at a later date.