A memorial service for Elwood “Red” Jensen will be at 10 a.m. Saturday at the Bonnerup Funeral chapel in Albert Lea. The Rev. Kent Otterman will officiate. Visitation will be one hour prior to the service. Interment will take place at Central Freeborn Lutheran Cemetery. Military honors will be accorded by Freeborn County veterans organizations. 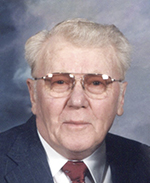 Elwood Dean Jensen was born May 18, 1928, to Merrills and Lily (Paulsen) Jensen in Albert Lea. Elwood “Red” Jensen enlisted in the United States Navy and served his country honorably until his discharge in 1946. On Feb. 11, 1950, he was united in marriage to Mildred G. Moen at Central Lutheran Church. The couple was blessed with two children.

Red was a lifetime resident of Freeborn County. He worked for several trucking firms and was the owner and operator of Tow ‘N Travel in Albert Lea for 25 years. His work was his hobby and he enjoyed what he did. He made a lot of friends and was able to help a lot of great people through his work. Red belonged to the state and national towing associations, where he served as the state president for two years. Aside from work, Red was a member of Grace Lutheran Church in Albert Lea. Red had been recently recognized for being a member of the American Legion for 50 years.

He is preceded in death by his parents Merrills and Lily; and brothers-in-law Duane Morreim, Cleon Moen and Ronald Moen.