Firefighters check on welfare of seniors through local program 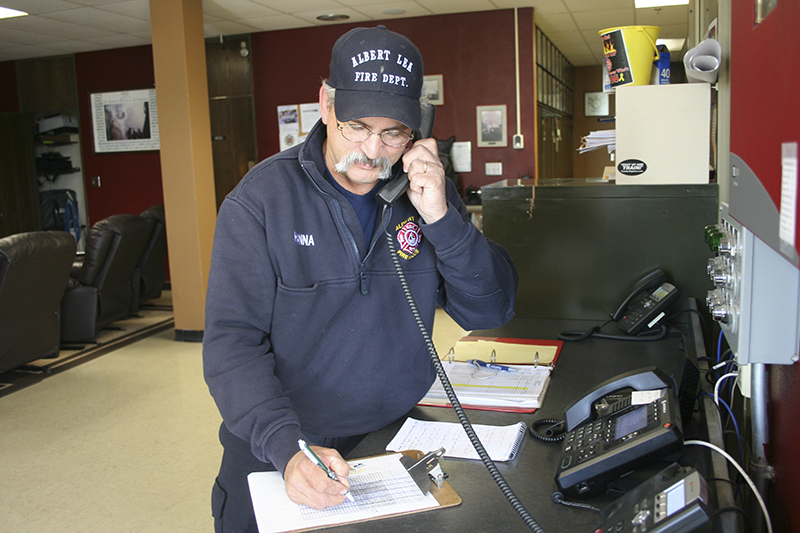 One local program has been working to keep area seniors safe for decades.

The program — called the senior reassurance program — was started in the late 1960s by the Albert Lea Fire Department after a woman went missing from church.

It is a free program for residents of Albert Lea and has had thousands of participants, according to Albert Lea firefighter Bart Berven.

If a participant is not heard from within the timeframe scheduled, they are given a call back by a firefighter. If the participant doesn’t answer the call someone comes to their house to check on their welfare.

Albert Lea resident Lee Bangert has been a participant in the program for a few years now and finds it to be terrific.

“Laughing is good for the soul,” Bangert said.

Bangert said she has lived a full life, but her favorite part of life now is getting to talk and laugh with the firefighters.

Bangert grew up in New York City in the Bronx and moved to Conger in 1956.

In 1957 she moved into her home in Albert Lea and has lived there since.

When the community theater in Albert Lea started she joined, playing the role of The Grand Duchess Olga Katrina in the play “You Can’t Take it With You.” She also starred in other plays, such as “Summer of the 17th Doll” and “Gypsy.”

She has made a living as a switchboard operator, teaching dance lessons and as a proofreader for the Albert Lea Tribune.

While she enjoys the senior reassurance program, she hopes to have more opportunities to socialize with other participants.

Bangert hopes other communities will institute programs to help senior welfare like Albert Lea has. She recalled a time when she was talking to a friend in Colorado about the senior reassurance program and learned that there was not a program like this in her city.

She finds the program to be very helpful, especially to someone who lives alone such as herself.