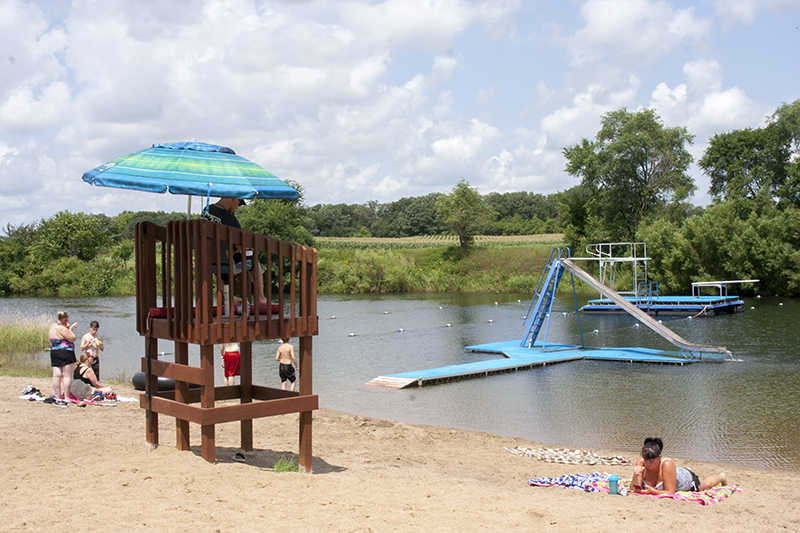 Glenville Beach is located outside of the town of Glenville. - Emily Wangen/Albert Lea Tribune

GLENVILLE — From Memorial Day weekend to the end of August, Glenville Beach is open to visitors to swim or go fishing.

The beach is made from a spring and has been open to the public for more than 50 years.

The beach is city-owned and family-run, and is currently managed by Mike Olson. Olson’s father, Wayne, managed the beach previously.

At Glenville Beach there is a water slide and diving boards for beach goers to enjoy, as well as lifeguards to help keep everyone safe.

The beach has a full concession stand for snacks and cold treats. One of the beach’s supervisors, Sarah Schumaker, noted that they have been trying to bring some new snacks to the stand throughout the summer.

Through Facebook and word of mouth, the beach has gained popularity over the years, according to Schumaker.

In the upcoming summers Schumaker hopes to have events such as children’s days at the beach. Schumaker encouraged families to come to Glenville Beach to have a fun and safe time.

Coolers and inner tubes are welcome at Glenville Beach, she said.

The beach is open from noon to 5:30 p.m. each day, weather permitting.

Admission for children five and under is free, students are $2 and adults are $3.