A Glenville man who allegedly attacked and threatened a woman in July 2015 pleaded guilty to felony threats of violence Wednesday in Freeborn County District Court.

Court documents state that on July 21, 2015, an Albert Lea Police Department officer was dispatched regarding a reported domestic assault that had occurred in Albert Lea.

The victim, who was known to Solano, was being seen at Mercy Hospital in Mason City. 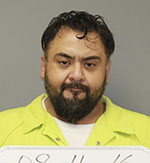 In a phone interview with the officer, the victim said Solano had became angry about comments that had been made about her and another personal relationship. Solano reportedly “back-handed her,” swore, pulled her hair and pulled her back into a vehicle when she attempted to leave.

The victim alleged Solano had punched her in the side and in the head, began “whaling” on her and threatened to kill her.

Solano reportedly drove to a house in Glenville and belittled her, court documents state. He apparently physically assaulted and choked her and at one point picked the victim up and threw her down on a concrete floor. Solano reportedly threatened to kill the victim multiple times during the incident.

Court documents state the victim had bruising on her right forearm, left elbow, inside of her left arm and chest. She also had scratches on her chest, chin and neck and below her left ear, as well as swelling on her left elbow.

Felony terroristic threats carries a maximum sentence of five years in prison and a $10,000 fine.

Solano was originally also charged with domestic abuse by strangulation and misdemeanor domestic assault, but those charges were dismissed.

Solano is charged with two counts of misdemeanor domestic assault in a separate file. Those counts are expected to be dismissed at sentencing.