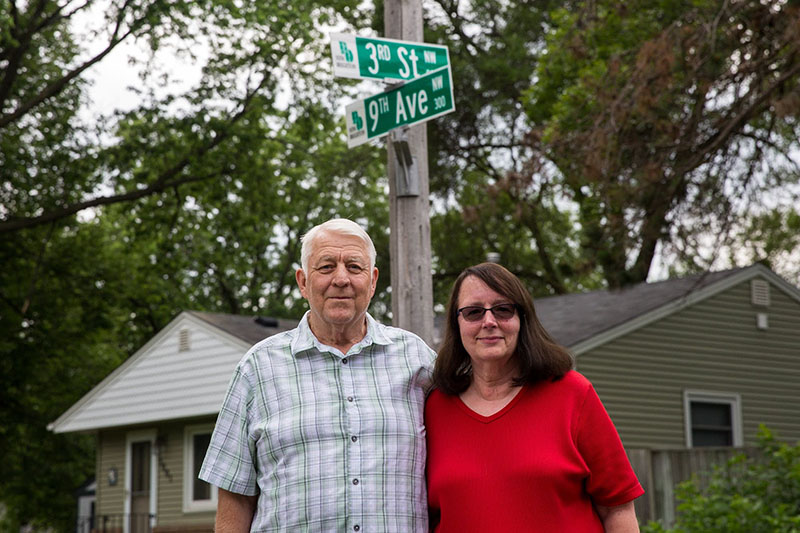 Mike and Barb Gustafson stand outside of their home in Woodbury on June 22. -Evan Frost/MPR News

Heather Gustafson knew exactly what to do after her father slumped into his chair and began turning blue while the family opened presents on Christmas Day 2012: Call 911.

The veteran St. Paul police officer made the call then handed off the phone to start CPR. Her parents’ New Brighton home was only a few blocks from the police station, so help should have been just a couple minutes away.

Critical minutes passed. Gustafson kept up CPR. But her mother, Barbara, said it took 10 minutes before a squad with oxygen and a defibrillator showed up. They found out later responders had been sent to a house on Third Avenue, not Third Street.

It’s not clear why Mike Gustafson’s heart stopped beating that day. He survived and has mostly recovered. His daughter, however, remains bothered by what happened and is pushing to fix the small — but potentially deadly glitch — in the 911 system tied to the increasing use of internet-based phone service.

While traditional landline phone services are very good locating people who need help, there are gaps when home service is routed through the internet via Voice Over Internet Protocol phones.

VOIP service has become increasingly popular through Comcast and other internet providers as consumers bundle their phone and technology services. But the geographic information that’s transferred seamlessly and automatically to 911 centers when someone calls doesn’t always work with VOIP phones.

In Gustafson’s case, the address for their Comcast phone was wrong. A 911 operator didn’t notice right away and the mistake slipped into the dispatch information that sent help to the other end of town.

Ramsey County officials say there was some human error involved in the call from the Gustafsons — the operator didn’t catch the mistake and should have.

“In an overwhelming majority of cases, we know through experience that our data is good, and our telecommunicators have the training and experience to work through discrepancies,” Nancie Pass, deputy director of the Ramsey County emergency communications center.

Still, the proliferation of VOIP home phone services is making more of those errors possible. Internet based phones, in particular, depend on secondary systems and even third parties to locate where calls originate.

Pete Eggimann, director of 911 services for Metropolitan Emergency Services Board, which oversees the regional 911 system across the Twin Cities, recalled a recent situation where a Chanhassen homeowner switching to an internet based phone abbreviated the home’s address in an enrollment form as simply the city of “Chan,” not Chanhassen.

Later, when the house caught fire, the computer system that picked up the 911 call couldn’t find a city named “Chan” in Minnesota and eventually routed the call to a call center to try and figure out which fire department should respond.

“They did talk to the caller, and were eventually able to resolve it. But it did delay the response probably five minutes or so. And in a working fire, five minutes is a long time,” he said. “The house was pretty much destroyed.”

The system standard is to have location information for 99.5 percent of 911 calls, Eggimann added. But even that small number of errors can be critical, especially in situations where someone can’t speak due to a medical condition or because they’re being threatened and fear being heard on the phone.

So how can you be sure help finds you when you make the 911 call?

If you have regular landline home phone service through a traditional phone company like CenturyLink, the account information held by the phone company is the gold standard and locating your address should not be a problem.

If you’re a cellphone-only user, new technology uses cell tower and GPS information to help locate you since your phone could be anywhere — although there’s no wireless technology that can pinpoint, say, exactly what house or apartment or office you’re in. You’ll have to tell an operator yourself.

If your home service comes through Comcast, Ooma, Magic Jack or other VOIP services, you should contact the provider and confirm your address is correct and complete, right down to the tiniest detail. Spelling matters.

Asked about the concerns surrounding VOIP and 911, Comcast referred questions to a trade group, the National Emergency Number Association, and to its own “Enhanced 911” web page.

In the end, public safety officials agree there’s only one sure way to get it right, and that’s to call 911 and check.

But it’s advice they are very hesitant to give for fear citizens will flood emergency centers with non-emergency address questions. So if you have a conventional landline or use only a cellphone, experts say you should not call 911 unless you have an actual emergency.

If your phone service runs through the internet and you want to run an address check, here’s what to do:

• Make the test call in the middle of the day, Monday through Friday, and tell the 911 operator immediately that it’s a test call.

• Be prepared for the operator to put you on hold or ask you to call back if someone else needs help.

• If you can, ask the operator to check the address information on your call, and then contact your phone service provider if there is a mistake. The 911 answering center cannot change your account information from their end.

Gustafson said she recalls her family’s close call when she’s on duty responding to 911 calls with little or no location information.

“I always knew it was a serious thing,” she said of the internet phone glitch. “But it’s kind of one of those where, we can’t find anyone, what do you do? Was it a misdial? Was it someone that needed help? And I think I probably do check the area a little bit more than some people do,” she said.

“It’s hard,” she added, “because I’m reminded every day in little ways: Is this really someone that really needs immediate help, and we can’t find them? And it sucks.”