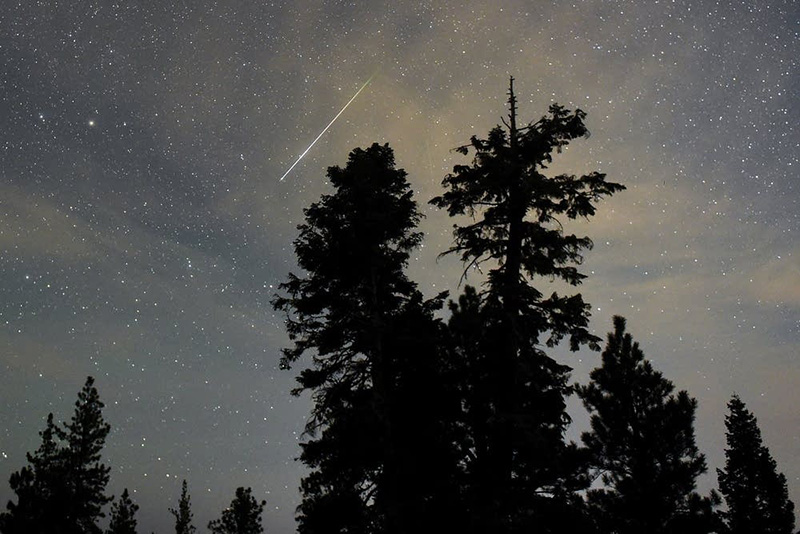 A Perseid meteor streaks across the sky above desert pine trees on Aug. 13, 2015, in the Spring Mountains National Recreation Area in Nevada. - Ethan Miller/Getty Images 2015

Look, up in the sky!

The annual Perseid meteor shower is back and will light up the skies this week, peaking late Thursday into Friday. And this year, we’re in for an even better show than usual, thanks to an “outburst.”

“Forecasters are predicting a Perseid outburst this year with double normal rates on the night of Aug. 11-12,” said Bill Cooke of NASA’s Meteoroid Environments Office. “Under perfect conditions, rates could soar to 200 meteors per hour.”

An outburst is a meteor shower with more meteors than usual. NASA says the last Perseid outburst was in 2009.

We can thank our pal Jupiter for the extra special show this year.

“Every Perseid meteor is a tiny piece of the comet Swift-Tuttle, which orbits the sun every 133 years. Each swing through the inner solar system can leave trillions of small particles in its wake. When Earth crosses paths with Swift-Tuttle’s debris, specks of comet-stuff hit Earth’s atmosphere and disintegrate in flashes of light. These meteors are called Perseids because they seem to fly out of the constellation Perseus.

Most years, Earth might graze the edge of Swift-Tuttle’s debris stream, where there’s less activity. Occasionally, though, Jupiter’s gravity tugs the huge network of dust trails closer, and Earth plows through closer to the middle, where there’s more material.”

And don’t worry — the folks at NASA say the Perseids pose no danger to Earth because they burn up miles above the planet (although an outburst could be problematic for any spacecraft).

No special gear is needed but it’s important to get away from bright city lights. This map can help you find a nice, dark viewing spot.

NASA said the best times to see the Perseids is between 3 a.m. and dawn.

The Minnesota Astronomical Society is also planning a viewing party starting at 9 p.m. Thursday at Eagle Lake Observatory in Norwood Young America. The event will be canceled if Mother Nature clouds things up.

And it’s not the same, but you can also hop online. NASA plans to stream the meteor shower Thursday night into Friday and again Friday night to Saturday.