A memorial gathering for Jakob T. Osborne of Albert Lea will be from 1 to 4 p.m. Sunday at Bonnerup Funeral Service in Albert Lea. Jakob Thomas Osborne, 18, was tragically taken on Wednesday, Aug. 3, 2016, from the result of suicide. 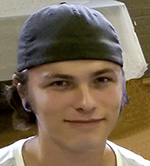 He was born on Jan. 9, 1998, in Albert Lea, the son of Jessica (Travis) Nelson of Albert Lea and Shaun (Tonya) Rice of Winona. Jakob attended Albert Lea and Alden schools. He worked at Teluwut in Lake Mills, Iowa, where he was not just an employee, but part of the Teluwut family. Jakob had an old soul. He loved old music and learning about the times of the past. He was a free spirit with big dreams. Jake’s smile was infectious. He touched the lives of everyone who knew him. Jakob was a huge cat lover — especially his best friend, Sheba.

Gone but never forgotten. You will be missed by many.