A celebration of life service for John Waalkens will be at 11 a.m. Friday at Hollandale Reformed Church. The Rev. Neil Ooms will officiate. Visitation will be one hour prior to the service at church. Interment will be in Hillcrest Cemetery at a later date. 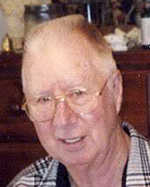 John Henry Waalkens passed away Friday, July 29, 2016, at his home in Glenville. He was 80. John “Johnny” was born to parents Melvin and Mary (Loverink) Waalkens on March 9, 1936, in rural Freeborn County. He grew up in and around the Rose Creek and Hollandale areas. He was a member of Conservative Congregational Church in Hollandale. On March 27, 1955, John married Judy King at First Lutheran Church in Albert Lea.

For 35 years, John worked at Wilson & Co. in Albert Lea as a truck spotter until retirement. John was involved as a member of Pheasants Forever and the National Rifle Association. His hobbies included deer hunting, fishing, gardening, woodworking, traveling and riding his motorcycle. John also enjoyed having coffee and visiting with his friends and family.

In lieu of flowers, the family prefers memorials to be sent to cancer research funds or to the donor’s choice.