Keith Sidney Miller was born Dec. 30, 1922, the youngest of five children, to Sidney and Lura Miller of Freeborn. He was baptized and confirmed at Congregational Church in Freeborn. He attended Freeborn schools and graduated from high school in 1940. 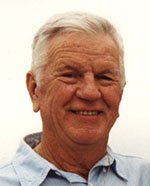 Following high school, he attended the School of Agriculture at the University of Minnesota in St. Paul. While in college he participated in cross country and basketball. He loved music and performed in the college production of “H.M.S. Pinafore” operetta. During his college years he also met, and later married, Maxine “Micki” Ruth Halland of Storden, on Oct. 10, 1943. They shared over 71 years as man and wife. Following college, Keith returned to farm with his father and later with his son and grandson. Green Leaf farm has been in the Miller family for over six generations.

Keith enjoyed his years farming, traveling with Maxine to China, Japan, and several European countries. They spent many winters in Florida to escape the cold Minnesota weather. He also enjoyed woodworking — making grandfather clocks for his children. Keith and Maxine loved square dancing and spent many happy years dancing, making many good friends. He had an avid interest in collecting cars, reading and spending time with his grandchildren and great-grandchildren. He was a member of United Methodist Church in Albert Lea.

It was the wish of Micki and Keith to have one celebration of life to honor them both. Visitation will be at 10 a.m. Saturday prior to the service at 11 a.m. at United Methodist Church in Albert Lea. The family asks that attendees plan to join the family at noon for lunch.