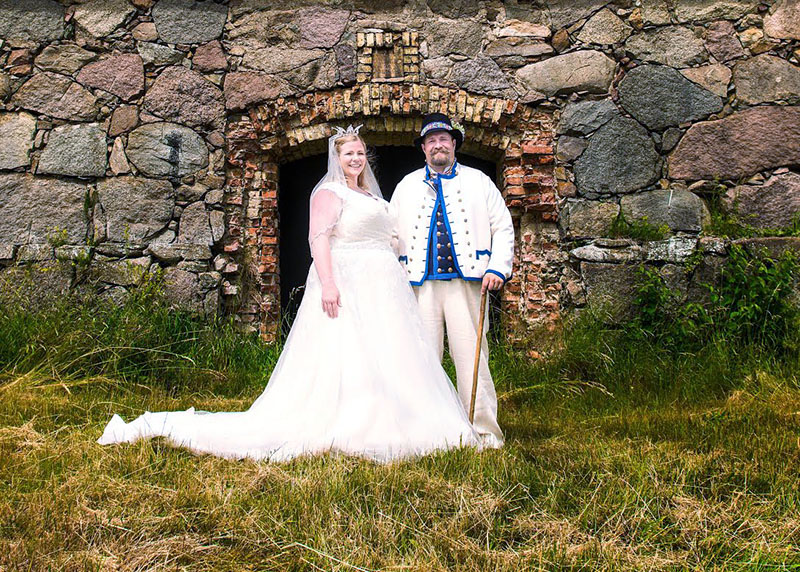 Rachel Knudson of Hartland and Martin Johnson of Easton were married June 24, 2016, during a Midsommar Eve ceremony at Everlöv Church in Skåne, Sweden, a 12th century church unique for its elaborate artwork. The Rev. Gert Nilsson of the Church of Sweden, professor emeritus at Lund University, officiated and was assisted by theology student Hanna Pierre Nilsson.

The groom’s family has ties to this Lutheran church dating back to the Middle Ages. The reception was organized by the groom’s cousins Åsa Bergström and Eva Nilsson and was hosted by the Helje Mattsson Family Association. The event took place at Lilla Rödde Textile Museum.

The groom wore traditional wool and linen folk clothing from that region of southern Sweden. The bride wore an American-style wedding dress — an ivory A-line lace and tulle gown with a cathedral train and a fingertip-length veil. The bride was also adorned with a silver Norwegian bridal crown and brooch.

A local reception for family and friends took place July 16, 2016, at Cross of Glory Lutheran Church in Hartland.

The bridal attendant was Kathryn Knudson, sister of the bride. The personal assistant was Brooke Wakefield, cousin of the bride.

The groom’s attendant was Leif Nilsson, husband of the groom’s cousin.

The bride is the daughter of Elizabeth and the late Kernel Knudson of Hartland. She graduated from Perpich Center for Arts Education in 1996 and Grinnell College in 2000 with a major in anthropology. She was a midwife at River Valley Birth Center in St. Peter.

The groom is the son of Arnie and Joyce Johnson of Rush City. He graduated from Rush City High School in 1994. He is a railroad engineer/supervisor and auctioneer. He has two sons, Lief and Isaac.

The couple spent three weeks before the wedding traveling in Sweden and Norway, visiting relatives and the ancestral farms, churches and villages of their great-grandparents and great-great-grandparents, who immigrated to Minnesota, before honeymooning in Iceland on their return trip from Scandinavia. They will reside at the Knudson farmstead in Hartland Township.