A gathering of family and friends for Larry B. Mook, 68, of Albert Lea will be from 5 to 7 p.m. today at Bayview/Freeborn Funeral Home. Burial will be at 10:30 a.m. Friday at Hillcrest Cemetery. Military Honors will be accorded by the Veterans of Foreign Wars and American Legion Honor Guard. Lunch will be served at Bayview/Freeborn Funeral Home. Online condolences are welcome at www.bayviewfuneral.com. 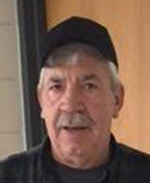 Larry B. Mook was born on Jan. 13, 1948, in Hannibal, Missouri, the son of Robert and Gladys Luella (Butler) Mook. He grew up and attended school in Hannibal. On March 11, 1967, Larry married Patricia Shinn. Larry served in the United States Army in Vietnam. He retired from Dulas Excavating as a heavy equipment operator. He was a member of the Wells Veterans of Foreign Wars and enjoyed fishing, gardening and camping.