Inez Lorraine was born April 24, 1918, to Claude Chase Robbins and Rena Thompson Robbins on their farm in Wasioja Township, Dodge County. She was the first of seven children. Through her father’s side, she was a descendent of many early colonial settlers to America, while her mother’s parents had emigrated from Norway. 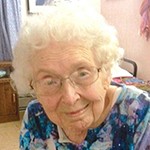 When Lorraine was 14, the family moved to Mantorville, where she graduated as salutatorian from the local high school. Then she attended Normal Training School to become a teacher in nearby Kasson. She taught in a one-room country schoolhouse for three years, coming home to stay with her family on weekends. On Aug. 28, 1938, she married her high-school sweetheart, Lloyd LeRoy Stussy, son of Walter Stussy and Esther Maxon and a graduate of Rochester Junior College and the University of Minnesota. Lorraine put her teaching career aside to support Lloyd’s career and raise their three children. By 1942, the couple was residing in Wells, where Lloyd was a teacher and coach in a career that lasted some 50 years.

When son, David, began his freshman year at Gustavus Adolphus College, Lorraine decided to enroll at Mankato State College, and mother and son graduated from college the same year. After graduating Lorraine taught fifth grade at Winnebago for six years, then retired again to care for her aging mother.

Lorraine was a very active community member, participating in such groups as Campfire Girls, League of Women Voters, the Food Co-op board and United Methodist Church, holding numerous offices.

After 64 years of marriage, Lloyd died Jan. 1, 2003, at 85. Lorraine remained in their Wells home until she moved into Parkview Care Center due to mobility problems.

A graveside ceremony for Lorraine will take place in the Pine Island Cemetery, where she will be buried beside her husband, Lloyd. In lieu of flowers, memorials may be given to the Wells Library Foundation at 54 First St. SW, Wells, MN 56097 or the Wells Historical Society at P.O. Box 43, Wells, MN 56097.

The family thanks all those, in her later years, for adding to the quality of her life — especially the wonderful Parkview staff and her loving neighbors and friends. She and Lloyd are now gone, but their love of life, their sense of humor, and the tales of their travels (after Lloyd learned to love flying) will be shared in stories for years to come, especially those trips taken with grandchildren along for the joy ride.

Macken Funeral Home is in charge of arrangements. Online condolences are welcome at www.mackenfuneralhome.com.