Lyle Stevermer, 84, of Winnebago died Tuesday, Aug. 2, 2016, at his home on Bass Lake surrounded by his family. A Mass of Christian burial will be at 10:30 a.m. Saturday at Our Lady of Mount Carmel Catholic Church in Easton. Visitation will be from 5 to 7 p.m. Friday with a 7 p.m. prayer service at Bruss-Heitner Funeral Home in Wells. Visitation will continue one hour prior to the service at the church. The Rev. Andrew Vogel and Deacon Gene Paul will officiate. Interment will be in Our Lady of Mount Carmel Catholic Cemetery in Barber Township, Faribault County with military honors accorded by the Easton American Legion Post No. 569. Bruss-Heitner Funeral Home is assisting the family. To leave an online condolence, visit www.brussheitner.com. 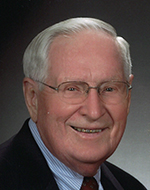 Lyle Edward Stevermer was born July 30, 1932, to Ernest and Marietta (Dezell) Stevermer. He was the second of four children. He was raised on a farm in Barber Township, and in his youth was a Golden Glove boxer. Lyle graduated from Delavan High School in 1950 and worked in his family’s house moving business and as a cabinet-maker before enlisting in the United States Army. He served in the Korean War, attaining the rank of sergeant first class and the combat infantry badge as commander of a tank platoon.

Lyle married his high school sweetheart, Bernadette Giese, on Oct. 23, 1954. Bernadette passed away in 1966, at the age of 30. Lyle was faced with the daunting task of raising five young children while nurturing a fledgling business. On June 15, 1968, Lyle married Dolores Giese, Bernadette’s sister, and together they raised their family. On Sept. 24, 2010, he was united in marriage to Cecelia Stevermer.

Lyle had a keen ability to envision solutions to mechanical problems and he loved to design ways to solve those challenges. While engaged in farming, he invented a metered grain weigher to measure grain for feed. In 1962 he entered his invention in the Minnesota Inventors Congress in Redwood Falls and won overall grand champion of the show. With the encouragement and assistance of family and the Winnebago Development Corporation, he began manufacturing this product and his company quickly grew to include the manufacturing and sales of a number of agriculture-related products. His entrepreneurial spirit led him to a wide variety of business ventures including manufacturing agricultural and distance-measuring products, part ownership of a supper club, a grocery store, antique store, art gallery and several businesses publishing and distributing limited edition art prints. He was actively engaged in his most recent business venture manufacturing bird feeders until the time of his death.

Lyle was fiercely proud of his family, his heritage and his country. Although he worked hard to attain success, he was grateful for the opportunities given to him and never underestimated the sacrifices of those who served to make the nation a free country. He enjoyed many years living at Bass Lake, spending time on the water with his family and watching the wildlife.

He was preceded in death by his parents; his wife, Bernadette; brother, Daniel Stevermer; and sister, Carol Voss.